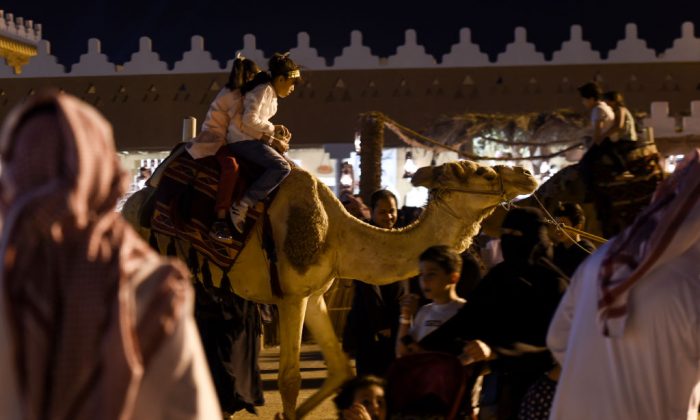 Saudi children ride a camel at Al-Qasim pavilion, during a cultural festival on the outskirts of the capital Riyadh in Saudi Arabia on Feb. 17, 2018. (Fayez Nureldine/AFP/Getty Images)
Middle East

The country hopes to diversify its economy and depend less on crude oil exports for income. The government is investing 500 billion for the massive project, and hopes to have the first section complete by 2025, according to The Independent.

The city-building project is known as Neom. The government designated 10,230 square miles to build on. The city would connect with nearby countries Jordan and Egypt. The government wants the city to run on 100 percent renewable energy, The Independent reported.

“This place is not for conventional people or conventional companies, this will be a place for the dreamers for the world,” said Saudi Crown Prince Mohammed bin Salman, via The Independent. “The strong political will and the desire of a nation. All the success factors are there to create something big in Saudi Arabia.”

Although Saudi Arabia exports more oil than any other country, dropping oil prices have the country looking toward other ventures as it struggles to pay oil workers. Once the new city is complete, it will focus on diverse economic ventures that include energy, water, biotech, food, manufacturing, and entertainment, according to The Independent.

The Neom project was announced at a conference in October 2017. Financiers include both the Saudi government and private investors, The Independent reported. A former chief executive of Siemens AG and Alcoa Inc., Klaus Kleinfeld, is leading the Neom project, according to The Independent.

Saudi Arabia has already started awarding construction contracts for the new city. The country wants to start with five palaces for the royal family, Reuters reported. The project design document features beautiful architecture of both modern and traditional design. It also includes helipads, a golf course, and a marina.