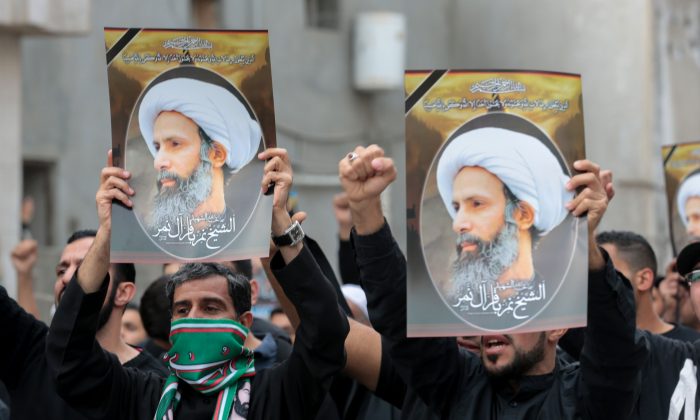 Saudi Shiite men hold placards bearing portraits of Shiite cleric Nimr al-Nimr during a protest on Jan. 8, 2016, in the eastern coastal city of Qatif, against his execution by Saudi authorities in Jan. 2. Nimr was a driving force of the protests that broke out in 2011 in the kingdom's Saudi Eastern Province, an oil-rich region where the Shiite minority of an estimated 2 million people complains of marginalization. (STR/AFP/Getty Images)
Middle East

By raising sectarian temperatures throughout the Middle East, the Saudis risk escalating the unaffordable proxy wars they've already bogged themselves down in

Apparently not content to rest on those dubious laurels, Saudi authorities followed that high water mark by executing 47 people—by beheadings and firing squads—on New Year’s Day alone. It was the highest number of executions in a single day in the kingdom since 1980, when Saudi authorities publicly beheaded 63 Sunni fundamentalists behind the takeover of the Kaaba during the 1979 Hajj.

The majority of those killed on Jan. 1 were alleged terrorists convicted on charges stemming from the country’s al-Qaida insurgency, which wreaked havoc across Saudi Arabia in the mid-2000s. Four, however, were Shiites—including the internationally revered Ayatollah Nimr Baqir al-Nimr, a vocal advocate for the kingdom’s oppressed Shiite minority.

A Saudi court sentenced al-Nimr to death in 2014 after convicting him of eight crimes, including “waging war against God.” In the immediate aftermath of the execution, Arab News—a Jeddah-based English daily owned by the royal Saudi family—accused the slain cleric of delivering sermons that incited violence, even blaming him for the death of policemen in the Shiite-majority Eastern Province in 2011.

According to the article, al-Nimr advocated a “public uprising against the state” and “secession of the Shiite regions to form a united Shiite state.” Saudi Arabia’s Grand Mufti—the kingdom’s highest religious authority—endorsed al-Nimr’s execution, asserting that the Saudis were showing “mercy” by preventing al-Nimr and the others from committing more “crimes.”

Across the Muslim world, however, Shiite political and religious figures have disputed this characterization of al-Nimr’s advocacy and expressed outrage at his execution.

To protest the killing of al-Nimr, hundreds of Saudi Shiites held demonstrations in the Qatif district of the Eastern Province, chanting “down with Al Saud” while holding placards bearing portraits of the slain cleric.

Across the Gulf, Iran’s Supreme Leader Ayatollah Ali Khamenei warned on Twitter that the “unfairly-spilled blood of oppressed martyr #SheikhNimr” would herald “divine revenge” on Saudi politicians. Iran’s top leader added, “This oppressed scholar had neither invited people to armed movement, nor was [he] involved in covert plots. … The only act of #SheikhNimr was outspoken criticism” of the Saudi regime.

The day after the execution, several hundred Iranians gathered outside the Saudi embassy in Tehran, storming and ransacking its offices and setting fire to the building before police drove them out. Iranian President Hassan Rouhani, who has sought to improve Iran’s relations with the Saudis since becoming president in 2013, condemned both the execution of al-Nimr and the attacks on the embassy, which he attributed to Iranian “extremists.” Since then, Tehran’s local council has passed legislation to change the name of a street near Riyadh’s embassy from Bustan to “Martyr Sheikh al-Nimr.”

Nouri al-Maliki, who served as Iraq’s prime minister from 2006 to 2014—and is still thought to be close with Iranian-backed militias operating in the country—likewise issued a condemnation of Saudi Arabia’s “detestable sectarian practices” against its Shiite minority. He predicted that the “crime of executing Sheikh al-Nimr will topple the Saudi regime” and likened al-Nimr’s death to Saddam Hussein’s execution of a prominent Iraqi Shiite cleric, Muhammad Baqir al-Sadr, in 1980. While speaking on Palestine Street in Baghdad, Ahmed al-Shahmani, a prominent Iraqi cleric, declared that “The House of Saud has opened the gates of hell on its own regime.”

In Bahrain, a Shiite-majority country ruled by a Saudi-backed Sunni monarchy, Shiites held protests on the restive island of Sitra and in al-Daih, a village situated west of Manama, where they chanted that al-Nimr is “our martyr.” The island kingdom’s interior ministry announced that Bahraini authorities had arrested “several rioters and vandals,” as well as “a small number of people who misused social media for illegal purposes” in response to al-Nimr’s execution.

Elsewhere, Syrian Information Minister Omran al-Zoubi described al-Nimr’s execution in state media “as a bona fide crime, an assassination of liberties and human rights, and a reflection of the policy of the oppressive and disturbed Al Saud regime.” Al-Zoubi called on “international organizations and relevant institutes” to hold the Saudis accountable for this act, which he described as a “a terrifying political and humanitarian crime that cannot be conceived by any human mind of law or religion.” The Syrian official asserted that “the spirits of the 47 victims will continue to strike fear into the Saudi regime and haunt it.”

Echoing that theme, Hassan Nasrallah, the secretary-general of Hezbollah, declared that “any hope for Saudi rational behavior has ended… When a regime loses its mind, that means it has reached the abyss.”

Thousands of Shiite Muslims as far away as Pakistan, India, and Kashmir also took to the streets to express their rage and grief. Meanwhile, members of the international community and human rights organizations with a more neutral stance on the Middle East’s Shiite-Sunni schism also reacted.

Ban Ki-moon, the U.N. secretary-general, was “deeply dismayed” by the execution of al-Nimr and 46 others. He demanded that all governments ban capital punishment and that Middle Eastern leaders take bold steps to de-escalate sectarian strife. Federica Mogherini, the EU’s high representative for foreign affairs, declared the Saudi cleric’s execution as cause for “serious concerns regarding freedom of expression and the respect of basic civil and political rights.”

Philip Luther, Amnesty International’s director of the Middle East and North Africa, accused Saudi Arabia of “using the death penalty in the name of counter-terror to settle scores and crush dissidents.” The London-based human rights organization also said that al-Nimr’s execution demonstrated the kingdom’s “utter disregard for human rights and life” and that the Shiite cleric was “convicted after a political and grossly unfair trial.”

An entirely predictable result of the killing has been an uptick in sectarian temperatures and an exacerbation of geopolitical tensions across the region. Judging by Saudi Arabia, Bahrain, Sudan, and the United Arab Emirates’ immediate severance or downgrading of diplomatic ties with Iran following Tehran’s vocal condemnation, that may well have been the point.

After nearly five years of sponsoring a Sunni-led insurgency against the resilient Syrian regime—and after almost ten months of waging a disastrous military campaign against Yemen’s Houthi rebel movement—Riyadh is coming to terms with new geopolitical realities in the region: Namely, that its strategy of countering Iranian influence via seemingly endless proxy wars has failed to achieve the kingdom’s objectives.

Instead, these expensive quagmires are speeding up the rate at which the Saudis are burning through their financial reserves—at a time when low oil prices globally are already putting a squeeze on the kingdom’s traditional strategy of tamping down domestic dissent with lavish social spending. By beheading al-Nimr, the Saudi leadership is sending a clear message to Shiites at home and abroad about the kingdom’s steadfast commitment to maintaining an iron fist in its Eastern Province, where Riyadh accuses Tehran of fomenting unrest.

Al-Nimr’s execution also was intended to communicate an important message to Saudi Arabia’s Wahhabi Muslims at a time when Daesh—also known as the so-called Islamic State—is stepping up its terror campaign against the kingdom. Despite Riyadh’s aggressive posture against Iran and harsh oppression of Shiite dissent in the Eastern Province, Daesh’s recruiters have sought to exploit some Saudi Sunnis’ belief that the ruling family has gone “soft” on Iran and Shiite activism in the Gulf region.

Late last year, after Saudi Arabia’s young and inexperienced defense minister announced the establishment of a 34-nation Sunni Muslim coalition to defeat Daesh and other groups across the Islamic world, ISIS leader Abu Bakr al-Baghdadi mocked the alliance and demanded that Saudis “rise up against the apostate tyrants and avenge your people in Syria, Iraq, and Yemen.”

Last year’s series of Daesh-orchestrated attacks targeting Shiite worshipers in Saudi Arabia’s Eastern Province and Kuwait City factored into the extremist group’s plans to force the Saudi rulers to come to the defense of the kingdom’s Shiite minority, a ploy to drive a wedge between the kingdom and Saudi Wahhabis who share Daesh’s view of all Shiites as “apostates.” By killing al-Nimr and three other Shiite activists along with the several dozen Sunni jihadists, Saudi Arabia likely intended to convince its population that Riyadh is committed to crushing all “terrorist” groups—both Sunni and Shiite—to avoid providing Daesh with further opportunity to exploit sectarian flash points in the region, most notably in the kingdom’s restive Eastern Province.

A Crisis of Saudi Arabia’s Own Making

Given Iran’s role as the heart of 21st century Shiism, Tehran cannot afford to permit al-Nimr’s execution to go unanswered. Elsewhere, militant groups in Bahrain, Yemen, and Iraq all warned the Saudis on numerous occasions that the execution of any member of the al-Nimr family would be answered. Given Saudi Arabia’s interests around the region, there’s ample opportunity for such groups to enact revenge for the cleric’s execution. Al-Qaida in the Arabian Peninsula has also promised to take action for the kingdom’s killing of al-Qaida members.

Naturally, it’s difficult to predict how such groups will make good on their not-so-veiled threats. Yet the stepped up security presence across the Eastern Province underscores that Saudi Arabia is taking concerns about blowback seriously.

Unfortunately, sectarian temperatures inside Saudi Arabia and neighboring countries have reached a boiling point. Low oil prices, inflated budgets, an expensive war in Yemen (which is costing the kingdom $6 billion per month), and Riyadh’s commitment to propping up the Egyptian military regime in Cairo are causing the kingdom’s coffers to rapidly drain. By executing al-Nimr, the Saudis have knowingly made a decision that will escalate these costly proxy wars, which Riyadh won’t be able to finance indefinitely.

Over time, the people of Saudi Arabia may come to realize that their biggest enemies aren’t nonviolent Shiite clerics or political activists advocating democratic reform and gender equality. The real threat to their long-term security stems from an autocratic and reactionary monarchy that’s increasingly angering and offending a growing number of Muslims, regional governments, and human rights activists all over the globe.

Giorgio Cafiero is the CEO of Gulf State Analytics. This article was previously published on FPIF.org