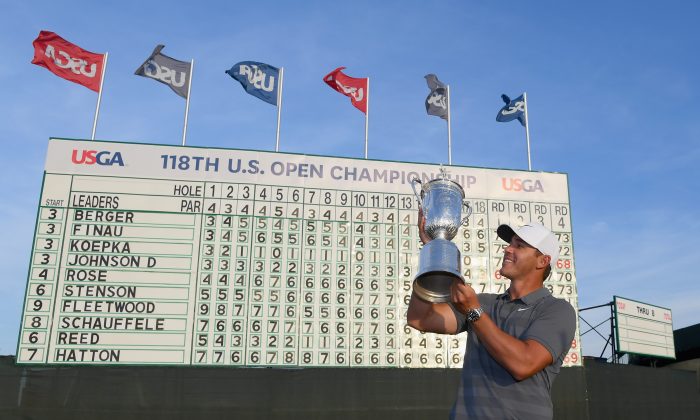 SOUTHAMPTON, New York—Brooks Koepka defending his title was the expected storyline for the 118th U.S. Open and it provided the perfect counterpoint to the near travesty the United States Golf Association (USGA) caused with its ill-thought-out preparation for host course Shinnecock Hills during Saturday’s third-round play.

The 28-year-old American closed with a three-under-par 68 to win by one shot over Englishman Tommy Fleetwood who tied the record for the lowest round ever scored in a U.S. Open with a closing 63. Koepka becomes just the seventh golfer to successfully defend his title—the last being American Curtis Strange in 1988-89.

In 2004, the last time Shinnecock Hills hosted the U.S. Open, the USGA lost control of several of the putting surfaces, most notably the par-3 7th, due to a lack of watering. The return to the iconic and storied layout in eastern Long Island was looked upon as a clear opportunity to demonstrate that new leadership within the governing body for golf in America had learned from past errors.

The USGA leadership was quick to point out that several new elements from a science standpoint would also be incorporated into their efforts ensuring putting greens would be playing at appropriate levels of speed and be able to hold approach shots when struck properly.

Saturday’s third round, particularly as it impacted those with afternoon tee times, resurfaced all of the storylines from the 2004 debacle. The USGA was quick to state its errors when play concluded Saturday, admitting several super-demanding flagstick hole locations were placed too near to green edges causing players to have their best efforts rejected. Nonetheless, the headlines that followed were predictable and scathing.

The Saturday imbroglio was further complicated by star golfer Phil Mickelson. The five-time major champion was not seriously in contention but when he intentionally hit his ball after putting it on the 13th hole, the nature of the event was turned on its head.

Complicating matters was the USGA’s decision not to disqualify Mickelson for a serious breach of the rules but to levy a two-stroke penalty. The television storyline involving Mickelson simply countenanced the belief for a number of players that the setting up of the golf course by the USGA was reverting back to what had happened in 2004.

Raw feelings were exposed with players such as Ian Poulter stating how the same people leading the event could remain in place with such outcomes. Extreme course conditions have happened beyond the connection to Shinnecock Hills and the USGA freely admits to pushing course set-ups as close as possible to the edge. The issue becomes when the edge is crossed and fairness in the presentation is hopelessly compromised.

Fortunately, Sunday’s final round refocused the attention where it needed to be—on the players competing. Fleetwood’s epic final round could have broken the all-time low round in a U.S. Open with a 62, but he narrowly missed a 10-foot birdie at the 18th.

Koepka began his final round tied with a trio of players including world-number-one-ranked Dustin Johnson. He played the bulk of his round knowing Fleetwood had finished with a 282 total—two over par for the event. In the final nine holes, Koepka made timely putts on several holes and was able to play the 18th with a two-stroke lead. His concluding bogey provided a one-shot win and moved the Floridian to No. 4 in the world rankings.

Returning to Shinnecock Hills for the fifth U.S. Open was also a clear signal from the USGA that recent new venues such as Chambers Bay and Erin Hills in 2015 and 2017 respectively are now in the rear view mirror as future host sites.

Classically designed courses such as Shinnecock Hills, 2019 site Pebble Beach, and nine-time venue Oakmont form a core grouping of facilities serving as future hosts for the championship of American golf. Shinnecock Hills is already scheduled to host its sixth U.S. Open in 2026.

The meltdown on Saturday’s course preparation signalled to a number of players that the USGA is simply unable to create a competitive balancing act that blends the concepts of tough and fair together. The ongoing relationship will likely remain one in flux. The only time competitively that the USGA and the world’s leading professionals come together is at the U.S. Open. Nonetheless, the USGA is intent on having demanding courses so that the winner is able to demonstrate significant skills across the board.

Caught in the crossfire again is Shinnecock Hills. The historic club is one of the founding members of the USGA and players uniformly had praise for the genius of its design. The USGA wisely expanded fairways widths from 26 yards during the three previous modern Opens to a width of roughly 40 to 42 yards.

Fortunately, Saturday’s misfire allowed Sunday’s preparation to be handled in a far better manner. The brilliant golf displayed by Koepka in reclaiming the U.S. Open title was a needed story element to showcase what the event is truly meant to do. Just in the nick of time.