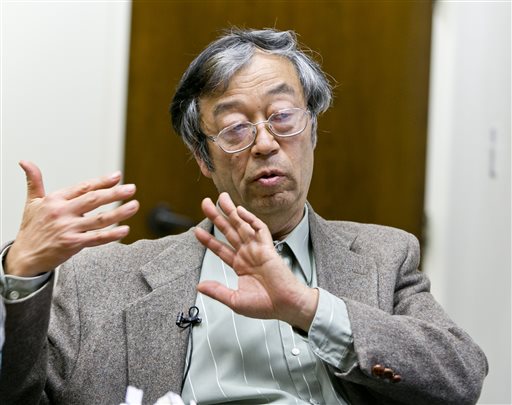 Dorian S. Nakamoto talks during an interview with the Associated Press, Thursday, March 6, 2014 in Los Angeles. Nakamoto, the man that Newsweek claims is the founder of Bitcoin, denies he had anything to do with it and says he had never even heard of the digital currency until his son told him he had been contacted by a reporter three weeks ago. (AP Photo/Damian Dovarganes)
Tech

That’s what some rumors suggest.

In fact, it’s not even certain that Nakamoto is the founder of Bitcoin.

A Japanese man was reported by Newsday this week to be Nakamoto and the founder of Bitcoin, which would make Nakamoto very much alive.

At the same time, the man later denied that he was the founder to the Associated Press and the LA Times.

If it is him, then he’s alive. Meanwhile, two other Japanese men who have the same name are dead, according to records.

See the AP story about Nakamoto below:

LOS ANGELES—The man Newsweek claims is the founder of Bitcoin denies he had anything to do with the digital currency.

In an exclusive two-hour interview with The Associated Press Dorian S. Nakamoto, 64, said he had never heard of Bitcoin until his son told him he had been contacted by a reporter three weeks ago.

Reached at his home in Temple City, Calif., Nakamoto acknowledged that many of the details in Newsweek’s report are correct, including that he once worked for a defense contractor. But he strongly disputes the magazine’s assertion that he is “the face behind Bitcoin.”

Since Bitcoin’s birth in 2009, the currency’s creator has remained a mystery. The person —or people— behind its founding have been known only as “Satoshi Nakamoto,” which many observers believed to be a pseudonym.