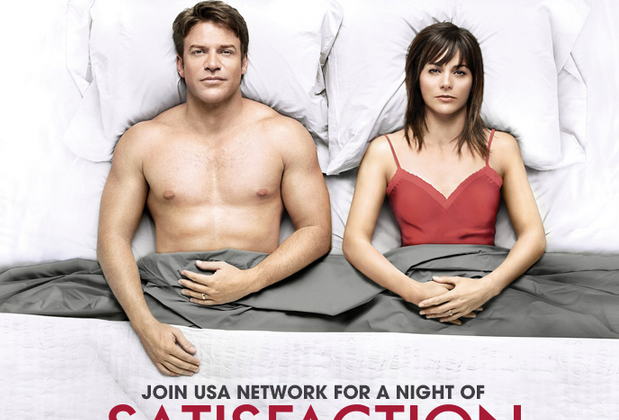 Satisfaction wraps up season 1 on USA Network on Thursday night and fans are wondering whether it will be canceled or renewed.

The network hasn’t made an official announcement yet either way.

The show premiered to fairly strong ratings (1.7 million overall, 0.5 million in the key 18-49 demographic) but then dropped several times before settling in at a 1.39 million average (0.41 million).

There was an uptick from episode 8 to episode 9 (1.1 million to 1.5 million). A strong season finale could push the show to renewal.

“Satisfaction is one of the lowest-rated shows on USA right now — and the cable channel is having a lot of problems in the ratings department. All of their older shows are way down year-to-year,” noted TV Series Finale.

“While that fact might improve Satisfaction’s chance of survival, I suspect the execs will cancel the series and put their time and energy into launching another new show.”

“A provocative drama that explores modern marriage at its midpoint,” the network originally described the series.

“Through the lens of one couple, Neil Truman (Matt Passmore, The Glades) and his wife, Grace (Stephanie Szostak, The Devil Wears Prada), this series answers the question, ‘What do you do when having it all is not enough?’ by delving into their shocking and unconventional choices.”