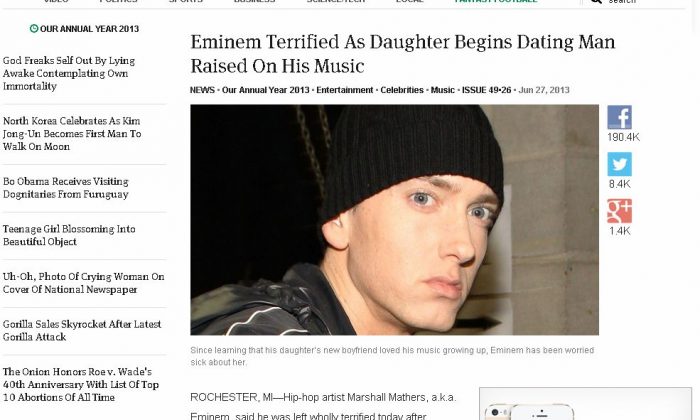 A screenshot of 'The Onion' article in question.
Social Media

An article from preeminent satire publication The Onion titled “Eminem Terrified As Daughter Begins Dating Man Raised On His Music” has again got many people thinking that the rapper is scared for his child, Hailie Jade Mathers.

The fake story was published several months ago but The Onion posted it on its Facebook again on Sunday as part of it’s year-end recap.

“At this point, I suppose it would be ideal for Hailie to date someone who never listened to any one of my songs, ever,” said Eminem in the satire article, adding “I have to go find my daughter right now.”

But, according to the ‘Onion’s’ disclaimer, it’s “a satirical weekly publication published 52 times a year on Thursdays” and “‘The Onion’ uses invented names in all its stories, except in cases where public figures are being satirized. Any other use of real names is accidental and coincidental.”

On its Facebook page, a number of people thought it was a real article, making comments about “karma” coming back to haunt the Detroit-born rapper.

“I guess reap what ya sew!!!!” reads one. “You Marshal should of never been able to even speak to your daughter having written such songs! So alittle late to judge this kid for listening to it like so many others influence by your music!” said another on the page.

“FYI for Eminem, most parents couldn’t understand the lyrics to your songs, and had No idea what their kids were listening to. Looks like your past has come back to bite you, but hopefully, You have enough of your daughter’s respect, that she will listen,” reads an especially long one.

It’s not the first time “The Onion” fooled people.

An article earlier this year about George Zimmerman–acquitted in the death of Florida teen Trayvon Martin–winning the lottery went viral. At the time, many believed it was true.