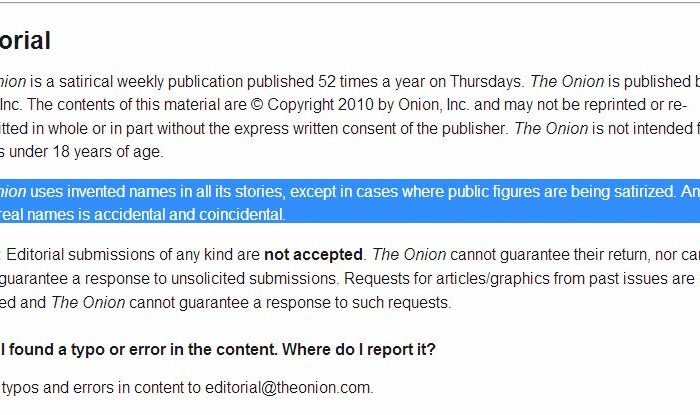 A screenshot of The Onion's FAQ shows that the website publishes satire.
Life & Tradition

Satire: ‘Brain-Dead Teen, Only Capable Of Rolling Eyes And Texting, To Be Euthanized’; Caitlin Teagart Death Not real

A video saying 13-year-old “Caitlin Teagart” will be euthanized because she’s “brain-dead” is nothing more than satire.

It was published on preeminent satirical website The Onion a few years ago but it again went viral on Friday.

A number of people apparently believed the video.

“The parents of 13-year old Caitlin Teagart have decided to end her life, saying she can now do nothing but lay on the couch and whine about things being ‘gay,'” it reads.

The Onion, which has been around since 1988 and has produced weekly newspapers and books, has a disclaimer.

“The Onion is a satirical weekly publication published 52 times a year on Thursdays,” it reads, adding: “The Onion uses invented names in all its stories, except in cases where public figures are being satirized. Any other use of real names is accidental and coincidental.”

On the Onion’s Facebook page, some users appeared to believe the satirical story.

“REALLY?? This has GOT to be a joke.. And it is a SICK one at that! She looks like any normal teenager to me,” one person wrote.

Added another: “How can you be brain dead and still text?I think something’s fishy.”