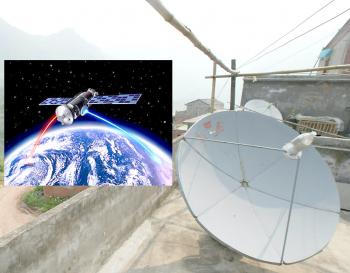 In 2005, the U.S. Broadcasting Board of Governors (BBG) signed a contract with European satellite operator Eutelsat to let Voice of America (VOA), Radio Free Asia (RFA), and U.S.-based non-governmental television and radio channels to broadcast to tens of millions of small satellite dishes across China on a long-term, protected basis. One of these television stations includes New York-based New Tang Dynasty Television (NTDTV).

The original broadcasting agreement was strongly supported by Congress and the current U.S. Administration. On July 31, BBG will cease to broadcast uncensored programs into China.

Since 2005, an “Open Satellite Window” agreement assured the 24/7 free flow of broadcasting into China. This agreement ensured a lifeline of open debate on the Olympics, the Tibet crisis, the Chinese earthquake, and other issues that the Chinese state-run media historically avoid reporting.

On July 31, the eve of the Beijing Olympics, BBG plans to cancel its contract with Eutelsat for its broadcast on the satellite W5, the only satellite protected by the Open Satellite Window agreement.

According to NTDTV, Eutelsat notified them of the situation because of the BBG’s contract cancellation, but it will also terminate its long-term contract to transmit NTDTV into China. By dropping the transmission and breaking ranks with the non-governmental channels, BBG will surrender the stations’ on/off switches to Chinese authorities.

BBG will also stop broadcasting to the tens of millions of 18-30 inch, concealable dishes that Eutelsat reaches across China, and will only be able to reach minimum four-foot dishes via AsiaSat 3S which uses a Chinese-controlled technical system.

The NTDTV satellite news channel in particular saw signs of trouble early on. On June 16, Eutelsat cut off NTDTV and other non-Chinese regime signals that were transmitted on Eutelsat’s W5 satellite since 2004. All VOA channels, RFA channels and heavy Pentagon traffic on this same satellite continued without interruption.

On July 10, Reporters Without Borders released a detailed investigation showing that Eutelsat’s shutdown of NTDTV’s signal was a premeditated, politically motivated decision to satisfy Beijing’s demands and get Chinese concessions and contracts. The Wall Street Journal also revealed in 2005 that Eutelsat repeatedly tried to shut down NTDTV’s Asia broadcast under pressure from Beijing, in return for Chinese state business.

The Reporters Without Borders report is available at http://www.rsf.org/article.php3?id_article=27818 .