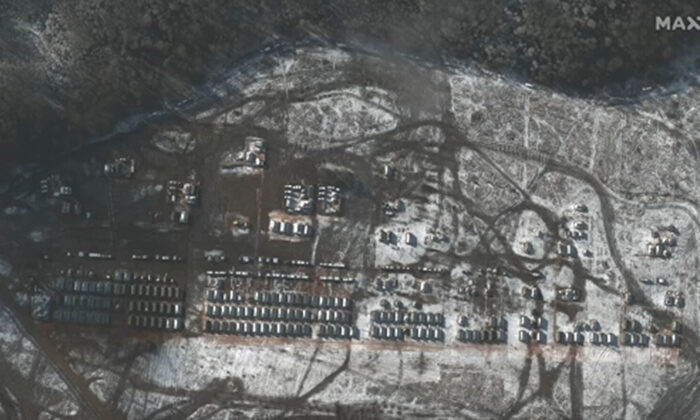 A satellite photo said to show Russian troop tents and administrative area near the Ukrainian border, between Oct. 18 and Nov. 26, 2021. (Maxar via AP/Screenshot via The Epoch Times)
Europe

Satellite images taken over the past month are said to show the build-up of Russian troops near the Ukrainian border, amid Western concern that the military concentration could herald plans by the Kremlin to attack its neighbour.

Maxar Technologies on Sunday released the images which were taken between 18 October and 26 November in both Russia and Crimea.

US intelligence officials have determined that Russia has massed about 70,000 troops near its border with Ukraine and has begun planning for a possible invasion as soon as early next year.

The troops’ presence so close to Ukraine is expected to dominate Tuesday’s call between Presidents Vladimir Putin and Joe Biden.

Moscow has denied hatching plans to attack Ukraine and rejected the Western concerns as part of efforts to smear Russia.