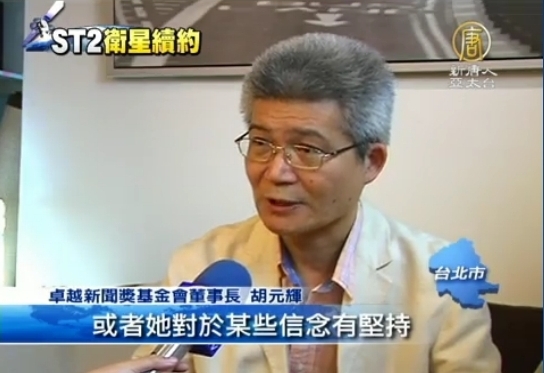 Hu Yuan-hui, chairman of the Foundation for Excellent Journalism Award, speaks to NTD Television in Taiwan on May 10. He supports Chunghwa renewing the contract for the broadcaster. (Screenshot via NTD)
China

There has been a swell of support in Taiwan in recent weeks, by politicians and other public figures, for the renewal of a satellite contract between New Tang Dynasty Television, an independent broadcaster, and Chunghwa Telecom, Taiwan’s largest telecommunications company, which the Taiwanese government has a large stake in.

As the presence of the People’s Republic of China continues to loom ever large over the small island of merely 23 million, the inking of this contract has been imbued with extra significance among journalists and politicians, since it would demonstrate that Taiwanese institutions are still able to defend the core values of their democracy, such as a free press, in the face of communist China’s economic overtures.

NTD is an independent Chinese-language broadcaster based in New York whose brand of bold reporting on issues like the persecution of Falun Gong, human rights more generally, corruption, and the political machinations that characterize one-Party rule have attracted the ire of the Chinese regime. Via Chunghwa’s satellite, NTD is able to reach viewers on the mainland, as well as in Taiwan and other countries in east Asia.

Chinese propaganda officials have for years attempted to interfere with the station’s broadcasting, including in a widely publicized case involving the French satellite company Eutelsat.

The contract between Chunghwa and NTD is due to expire in August.

The current controversy is a reprise of events two years ago. In April 2011, Chunghwa announced that it would not renew its contract with NTD—but after a campaign of support, in August the company renewed the contract for two years.

Reporters Without Borders said at the time that the reasons for the cancellation “lie elsewhere” than in the technical explanations first proffered. Chunghwa did not respond to telephone calls and emails requesting comment.

As the deadline approaches this time, Chunghwa has not indicated that it intends to renew the contract, which is being negotiated between Chunghwa and NTD’s Asia Pacific division, NTD-AP.

On May 2, the Legislative Yuan requested that the National Communications Commission (NCC) “help complete the renewal process according to the law.”

Days later, Lee Kunze, the convening committee member, on May 6, said that all members of the Legislative Yuan watch NTD’s programming.

“In the past few years, NTD has become an important source of news in the Chinese world,” Lee Kunze said. “We cannot let it disappear.”

He added that the NCC ought to investigate what is going on at Chunghwa Telecom, which appears to be delaying their finalization of a new lease for the ST 2 satellite.

“We do not want suppression of freedom of the press in Taiwan again, and we will not allow such a situation to happen again,” he said to the broadcaster.

Chunghwa has business interests in mainland China, and critics in Taiwan suspect that the delay is due to Chunghwa not wishing to renew the contract for commercial reasons. If it no longer carries NTD, Chunghwa may be given a larger slice of business in mainland China, where it is engaged in joint ventures with the state-run China Telecom.

Given the current delays in the contract renewal, NTD and its supporters in Taiwan are seeking to put Chunghwa under the same public scrutiny that was successful in 2011.

Those in Taiwan interested in freedom of information have started speaking out about the case, offering their support to NTD.

Shih Shin-min, the founding president of the Taiwan Environmental Protection Union said, “NTD is a leader for China’s democratization.”

Hu Yuan-hui, chairman of the Foundation for Excellent Journalism Award, a Taiwanese non-profit, said that “NTD is a station with conviction, and one that continues to expose truth. The relevant authorities should absolutely come out and pay attention to this matter.”

Echoing his remarks was the head of the Association of Taiwanese Journalists, Ch’en Hsiao-i, who said that NTD is “More willing to challenge the Chinese government.” She also said NTD was honest about the ways in which the Taiwanese media is timid toward China. “NTD has guts,” Chien said. Both Hu Yuan-hui and Ch’en Hsiao-i were interviewed by NTD.

Tsai Huang-lang, a Democratic Progressive Party (DPP) legislator, said, “NTD exposes many aspects of the dark side of the Chinese Communist Party, including destruction of human rights. Much of this we cannot find in other media. At the same time, it also substantially reflects the value of Taiwan’s free media. This is the reason why we love NTD.”

He added that NTD as a Chinese news broadcaster is already “deeply rooted in peoples’ hearts.”

A range of similar remarks came from both Kuomintang, the party to which current president Ma Ying-jeou belongs, and other Democratic Progressive Party legislators.

Film Director Chen Keshang said: “If this kind of independent media disappears, it would be a very unfortunate occurrence.” He added: “Many of our media are not serious, but NTDTV, for me, is a very serious media. Therefore, I strongly hope that it can continue on.”

With research by Sunny Chao and translation by Irene Luo.