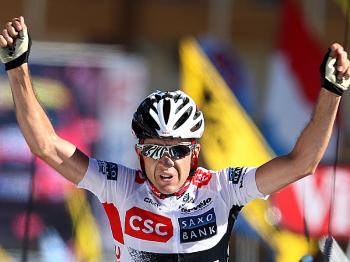 James Fish
alias for Chris J
View profile
Follow
biggersmaller
Print
CSC rider Carlos Sastre attacked at the base of l’Alpe d’Huez, escaping from the pack to take the stage win and the overall lead in Stage Seventeen of the Tour de France.

Team CSC did a masterful job of controlling the pace, wearing out the peloton with fast riding and with constant attacks, ensuring that no one could catch Sastre at the end.

Cadel Evands might have finished close enough to make up the gap in the time trial, but it will be a matter of a few seconds either way.

Many thought that the Tour de France would be decided on the slopes of the Alpe d’Huez; instead, the issue is less clear than ever.

Stage Seventeen, Embrun to L’Alpe d’Huez, was the hardest stage of the Tour. Long, at 210 km, it contained three Haut Categorie climbs, ending with the twisting switchbacks of L’Alpe d’Huez, which averages an eight percent grade.

The yellow jersey was very much up for grabs. The first two contenders, Bernhard Kohl and Cadel Evans, were within eight seconds of leader Frank Schleck; the next two, Carlos Sastre and Denis Menchov about a minute out. The sixth place rider, Christian Vande Velde, was three minutes, fifteen seconds behind, but he is a very strong time trailer and could make up quite a bit on Stage Twenty.

Because Stage Twenty, the penultimate stage of the 2008 Tour, would be a very difficult time trial, vastly favoring Cadel Evans, the other leaders knew they would need to gain a few minutes advantage over Evans in the next three stages. Evans, who came within seconds of winning the Tour in 2007, does not have the strong team support that CSC riders Schleck and Sastre, or Garmin Chipotle rider Vande Velde; Evans had to ride hard and fast every day.

Schleck said after Stage Sixteen that CSC would attack today. He knew well that he needed a much greater advantage going into the final stages if he wanted to take the overall win.

The race started with CSC setting a fast pace, intent on hurting the other riders as much as possible before the serious climbing started, to weed out any possible surprise attacks.

One group did make a breakaway: four riders, including Gerolsteiner rider Stefan Schumacher, whom one would have thought would be exhausted after his long solo breakaway yesterday, attacked at the three-kilometer mark. Milram rider Peter Velits started the attack, with Francaise des Jeux rider Remy DiGrigorio and Euskadie rider Ruben Perez; Schumacher joined before they got out of reach.

A stiff headwind hindered any further attacks once the climbing started. The breakaway held a five-minute lead to the top of the Col du Galibier.

DiGrigorio was unable to keep up on the descent and was dropped from the lead group. Perez dropped off shortly after, unable to stand the pace set by Velits and Schumacher. Eventually Schumacher cracked also. Velits led by slightly more than a minute over the peak of the Croix de Fer.

Just after the peak of the Croix de Fer, Jerome Pineau of Bouyges Telecom attacked, crossing the gap to Velits.

Meanwhile CSC continued its amazing display of team cycling, pushing the pace, controlling the peloton, and working together to make sure that all of Cadel Evans’ teammates cracked and dropped back.

CSC set a huge pace, but could not crack Evans. Frank Schleck had said that CSC would attack in this stage, but surprisingly seemed content to wait foe Evans to tire. However, because of Evans’ time trial ability, CSC had to gain at least a few minutes’ lead over Evans for Bernhard Kohl, Carlos Satsre, or Frank Schleck to have a chance at the overall win.

As the riders crossed the peak of the Col de la Croix de Fer, it seemed that victory in the 2008 Tour would be decided on the ascent up the most difficult climb in the race—the Alpe d’Huez.

At the base of the climb, Carlos Sastre attacked; Denis Menchov stayed right on his wheel; Sastre was caught, and then attacked again. Sastre left the peloton behind, desperate to make up the two minutes he needed to win the Tour.

A group of five took off after Sastre, including the Schlecks, Evans, Vande Velde, Valverde, Efimkin and Bernhard Kohl. The attacks came frequently; Andy Schleck, Vladimir Efimkin, and Christian Vande Velde got away briefly but got caught up.

The yellow jersey group spent its energy attacking; every rider except Cadel Evans took a turn or two attacking the group. The Schleck brothers attacked repeatedly to try to wear out the group; Evans rode his pace, to keep from wasting his energy, while the others sped up and slowed down, digging deep to escape, the dropping back to the group.

This series of attacks kept the yellow jersey group focused on itself, while Carlos Sastre continued to increase his lead. The CSC team was not trying to keep the yellow for Frank Schleck; they were giving Sastre a crack at the overall win.

Sastre seemed to get stronger, increasing his lead steadily. If Evans was to win the Tour, he had to make a move.

Finally, with five km left to go, Efimkin attacked, and Andy Schleck went with him. Valverde pulled the rest of the group along after the pair; once they came together, Cadel Evans attacked. With 3.5 km to go, Evans took his fate into his hands and rode away from the yellow jersey group.

With 2.5 km to go Valverde and Schleck took off, passing Evans; but Evans somehow found the legs to catch up and attack again.

In the final kilometer, Sammy Sanchez attacked, then Andy Schleck and Valverde, followed by Vande Velde. Evans kept his head and kept his pace, knowing he could make up time in the time trial.

Sastre made an amazing climb, gaining over a minute and more than a kilometer over the field in the length of the climb. Carlos Sastre definitely earned both the stage win and the overall. He had the support of what is certainly the strongest team in the Tour, but in the end, it was all personal effort. Carlos Sastre rode away form the pack, and was still gaining time as he crossed the finish line.

Yet, the question remains: did he do enough? Cadel Evans gave his all in trying to keep in the lead group with absolutely no support, but was that effort enough?

With only a few days left in the Tour, the overall win is still up for grabs.