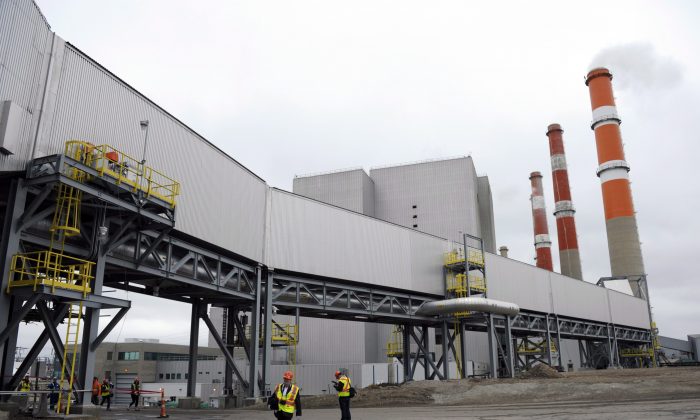 Part of a carbon capture and storage facility is pictured at the Boundary Dam Power Station (background) in Estevan, Sask. on Thursday, October 2, 2014. Saskatchewan's power utility is heralding its carbon capture and storage project, touted as the world's first commercial-scale operation of its kind. But Dale Eisler questions whether it will amount to much. (The Canadian Press/Michael Bell)
Canadian Content

If you happened to be in Saskatchewan mid-morning on October 2, you might have noticed a giant sucking sound. It came from about 250 people, including Premier Brad Wall, Federal Natural Resources Minister Greg Rickford, senior management with the government-owned Saskatchewan Power Corporation, and others from more than 20 countries around the world. They had assembled at SaskPower’s Boundary Dam coal-fired electrical generating plant near Estevan to witness the christening of the world’s largest commercial-scale, post-combustion, carbon capture project.

It was show time. At stake were the reputations of the Wall government, the federal government—which kicked in $240 million—SaskPower, and the whole idea of carbon capture and storage (CCS). Collectively, they all took a deep breath waiting for the answer to the question on everyone’s lips: “Does it work?” Over budget and at a cost of $1.4 billion, it better.

The answer was yes, and with it SaskPower put Canada on the global stage as a leader in the implementation of what some believe is a key breakthrough in addressing climate change. Others are not so sure, arguing it is a too expensive and a still-unproven technology that has been oversold as a feasible means to reduce emissions produced by burning coal. With the final cost still to be tallied, and some suggesting the price tag could reach $1.5 billion, there’s no arguing that CCS is expensive. The question is whether it’s worth it, and the answer depends on how you look at it and who you ask.

On the positive side, experts say the system at the Boundary Dam Power Station will capture 90 per cent of the greenhouse gases emitted by the generating unit. It will remove one million tonnes of CO2 a year, which is the equivalent of taking 250,000 cars off the road annually. Suddenly, there is such a thing as clean coal.

As one of the world’s cheapest and most common sources of fossil fuel—it generates approximately 40 percent of the world’s electricity—coal no longer has to be the dirty villain in the ongoing debate over climate change.

In Saskatchewan, that matters. Almost 50 percent of the electricity generated in the province uses coal as a fuel source. Saskatchewan also has large coal deposits, and it’s cheaper than using other fossil fuels, like gas or oil, in the province’s power plants. Moreover, the SaskPower project also generates a revenue stream. Up to 3,400 tonnes of captured CO2 a day is being sold to Cenovus that it’s using as part of its enhanced oil recovery efforts in nearby oil fields. Just how much Cenovus is paying SaskPower for the CO2 remains a mystery. But in the euphoria of the CCS launch, those details are but minor distractions. What matters is that thanks to carbon capture and storage technology, coal can have a future as a cost-effective, environmentally sustainable fuel.

The day after the Boundary Dam event, newly minted Alberta Premier Jim Prentice issued an edict effectively sidelining CCS as a public policy option in Alberta. He noted Alberta has invested 10 percent of the total amount spent in the world on CCS. Already on record as calling carbon capture and storage a “science experiment,” Prentice said he was not willing to put more tax dollars into the idea beyond the $1.3 billion already committed to two projects, including Shell’s CCS project at its Scotford upgrader near Edmonton. “This is a very sizeable investment of taxpayers’ money and prudence dictates that we should ensure that we begin to see some commercial viability to these investments,” Prentice said.

The doubt about CCS is shared by others. More than two years ago, TransAlta scrubbed its plans for its $1.4 billion Pioneer CCS project at its coal-fired power plant west of Edmonton, citing uncertainty about both the price of captured CO2 and the value of emission reductions in an uncertain regulatory environment.

At issue is a simple but vexing point. Even if CCS technology works, which apparently it does based on the SaskPower project, is it a good use of scarce public resources? Not even environmentalists who see climate change as the coming end of civilization as we know it are convinced it is. Some argue the money could be better used in more practical ways to reduce carbon emissions. Others dismiss CCS as merely a means to legitimize the continued burning of fossil fuels, when the objective should be to end or dramatically reduce their use. Indeed, for them the use of the captured carbon to extend the productive life of depleted oil wells merely makes matters worse.

But this is as much about image politics as it is about the environment. If nothing else, by financing the world’s largest carbon capture and storage venture, the Wall and Harper governments send a message that they’re serious about addressing climate change.

These days, maybe that’s not such a bad thing. The international opposition to Canada’s oil sands is a serious threat for Canada’s energy sector and its ability to access the global market, which would have grave costs for the Canadian economy. The Keystone XL pipeline project in the U.S. appears to be on life support. Meanwhile, the proposed Northern Gateway Pipeline to West Coast tide water and access to the much-needed global energy market is mired in controversy over Aboriginal rights and environmental risk.

In that reality, the arrival of a high-profile initiative attracting global attention like the SaskPower CCS project just might help change Canada’s image as a nation that produces dirty oil and is failing to seriously tackle its own commitment to reduce GHG emissions 17 percent by 2020.

Granted, at $1.4 billion it’s an expensive facelift. Maybe the money could have been better spent. But that’s beside the point. In the emotion-laden debate over climate change and what to do about it, everything gets magnified. So being seen as doing something serious, helps you look like and talk like you’re serious, even if you’re not. In the bizarre world of climate change policy and politics, it actually can make sense.