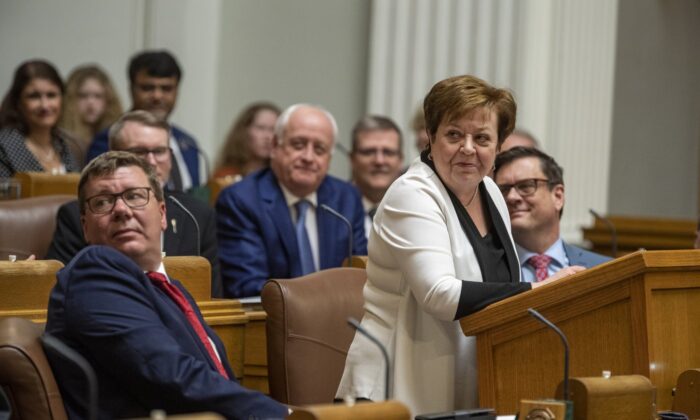 Finance Minister Donna Harpauer presents the Saskatchewan budget in the chamber of the legislator in Regina on March 23, 2022. (The Canadian Press/Liam Richards)
Canada

Premier Scott Moe says his Saskatchewan Party government will be doling out $500 cheques to all residents 18 and older starting this fall.

In a message posted Monday on Twitter, Moe said residents should benefit when resource prices are high.

He also announced that higher-than-expected oil prices have led to a balanced budget.

“Higher resource prices are driving our economy and they are creating thousands of new jobs. This has greatly improved our budget position from a deficit to a surplus,” Moe said in the video message.

“That’s good news, but it also means the cost of everything you buy has gone up. You own the resources and should benefit when those resource prices are high.”

Finance Minister Donna Harpauer forecasted a nearly $500-million deficit for the year when she tabled the 2022-23 budget in March.

But, the budget was based on natural resources being lower than they have been throughout the earlier part of the year.

On Tuesday, Moe said, Harpauer is to present her first-quarter financial update, which will detail how much money the province has made in natural resources during the early part of the year.

Since March, Saskatchewan’s NDP Opposition has called on the government to offer financial relief for residents as they deal with inflation and higher cost of living.

In a statement, Opposition finance critic Trent Wotherspoon said the government should have offered the relief months ago like other provinces have. He also linked the announcement to an upcoming byelection that has yet to be called for Saskatoon Meewasin to replace former NDP leader Ryan Meili.

“While Saskatchewan families have been struggling with historic inflation rates, rising cost of living expenses and record gas prices, the Sask. Party sat on billions in windfall revenues,” Wotherspoon said.

“The Sask. Party will consistently put their political interests above the wellbeing of the people of Saskatchewan — as they have done with these ‘buy’-election bucks.”

Moe said in his video that Harpauer will offer more details about the cheques when she presents her financial update Tuesday. He said she’ll also announce measures like paying down debt and helping small businesses.