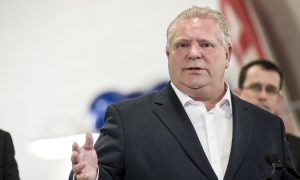 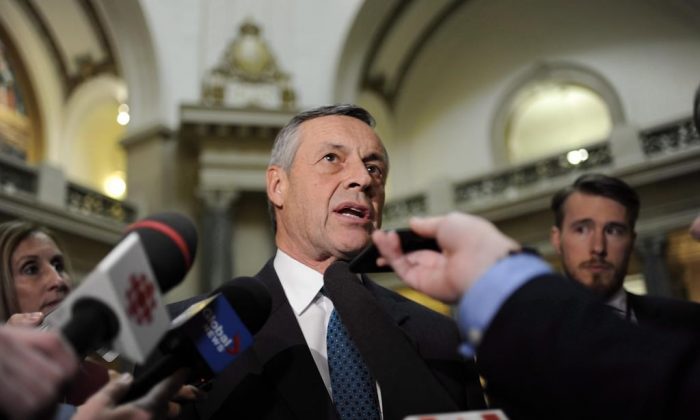 Don Morgan, then-deputy premier of Saskatchewan, speaks to reporters following the speech from the throne at the Legislative Building in Regina on October 25, 2017. (Mark Taylor/The Canadian Press)
Canada

SASKATOON—The Saskatchewan government has filed notice that it is taking its challenge of the federal carbon tax to the Supreme Court of Canada.

Justice Minister Don Morgan says the province will ask the high court to rule on whether the tax is constitutional and whether Ottawa has the jurisdiction to impose it.

Saskatchewan’s Court of Appeal ruled in a split decision earlier this month that the tax is constitutional.

It also said that establishing minimum national standards for a price on greenhouse gas emissions falls under federal jurisdiction.

Thank you to the intervenors that stand with Saskatchewan and support our approach to greenhouse gas emissions that does not – and will not – include a carbon tax on Saskatchewan families and businesses. pic.twitter.com/oDH3P3OeFT

Saskatchewan Premier Scott Moe, who has said the tax hurts his province economically, promised there would be an appeal.

Morgan said the province has two months to file a factum to the Supreme Court.

“Our government will continue to stand up for Saskatchewan people against what we believe is an unconstitutional tax on their families, communities, and businesses,” Morgan said Friday in Saskatoon.

He added that if the Liberals lose the federal election in October, there may be no federal tax left to fight. The Conservatives have promised to scrap the tax.

“The Supreme Court could say it’s moot, it’s not worth hearing because the government has changed the law,” said Morgan. “Or they could say, ‘No, this is a matter of import. We want to create a precedent.'”

A government spokesperson said in an email that the province does not have to ask for a leave to appeal in this case.

The federal tax has been imposed on provinces that have not implemented their own carbon levies: Ontario, New Brunswick, Saskatchewan, and Manitoba.

Ontario and Manitoba are also fighting the federal tax in court and Alberta has said it will join the legal battle.

Kenney said Friday that Alberta has not yet received a formal notice from the federal government on its tax.

“If and when we receive that, I will instruct our lawyers to proceed with filing a judicial reference to the Alberta Court of Appeal.”