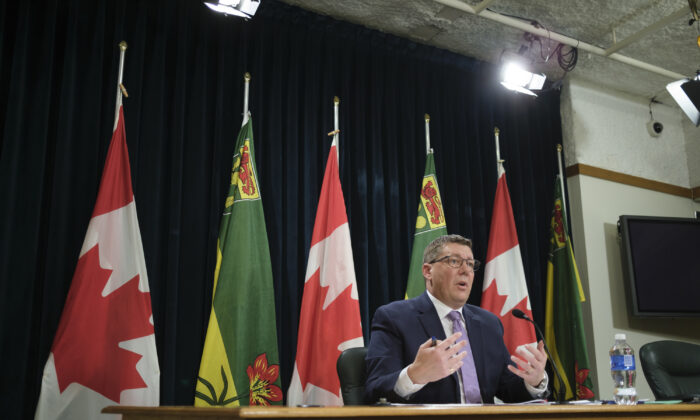 Premier Scott Moe at a press conference at the Legislative Building in Regina on Oct. 27, 2021. (The Canadian Press/Michael Bell)
Canada

“Now, with a clear end to the use of the Emergencies Act, it is time for a clear end to mandates and restrictions,” Moe said in a series of tweets on Feb. 23 following Trudeau’s announcement.

Originally invoked in response to demonstrations in Ottawa and elsewhere across the country against COVID-19 mandates and restrictions, Trudeau said the Act is no longer required because the situation is “no longer an emergency.”

“We are confident that existing laws and bylaws are now sufficient to keep people safe,” the prime minister said at a press conference in Ottawa.

Trudeau’s sudden announcement came as the Senate was still debating whether to confirm the government’s decision to invoke the Act, after MPs passed a motion on Feb. 21 to approve a 30-day extension of the emergency measures.

Moe said revoking the Act was the right thing to do, “because it should not have been invoked in the first place.” He added that law enforcement agencies already had all the tools they needed to manage the protests.

Moe stressed that the Liberal government should now end all COVID-19 mandates and restrictions.

“It is past time for the Trudeau government to detail a return to normal for all Canadians,” he said.

Saskatchewan’s vaccine passport requirements were lifted on Feb. 14. The province’s public health orders, including indoor mask mandates and the requirement to self-isolate if tested positive for COVID-19, are set to end on Feb. 28.

Earlier this week, Moe said Saskatchewan is considering a legal challenge of the federal government’s decision to invoke the Act. The province’s Justice Minister Gordon Wyant said on Feb. 23 that the province continues to evaluate legal options and expects to make a decision in the coming days.

On Feb. 19, Alberta Premier Jason Kenney had also said he will file a court challenge against the Liberal government, saying the invocation of the Act is “unnecessary and disproportionate,” and an intrusion into provincial jurisdiction. On Feb. 23, he took to Twitter, saying that the plan remains in place despite Trudeau’s decision to revoke it.

“Those whose rights have been violated, and provinces whose jurisdiction has been violated without justification must have their day in Court,” Kenney said. “The judiciary must be asked to establish limits on such arbitrary use of extraordinary police powers for the future.”