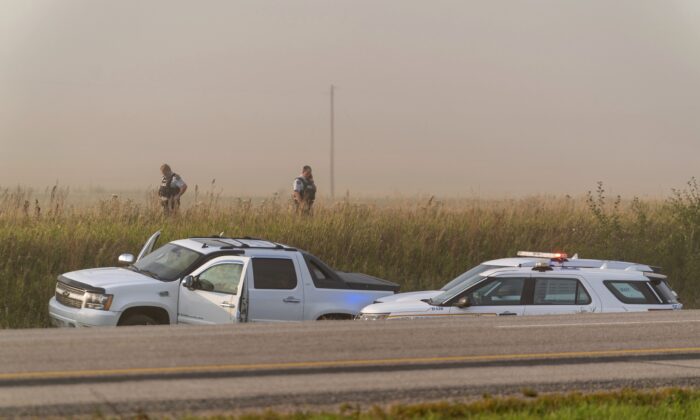 Police and investigators gather at the scene where stabbing suspect Myles Sanderson was arrested in Rosthern, Saskatchewan, on Sept. 7, 2022. (Heywood Yu/The Canadian Press via AP)
Canada

“Our goal is to examine the decisions of the courts, the parole board, and Corrections Canada to repeatedly release the perpetrator from custody despite his 59 previous criminal convictions, including assault, assault with a weapon, uttering threats, assaulting a police officer, and robbery.”

Dancho is her party’s public safety critic and a member of the House Standing Committee on Public Safety and National Security.

The committee held a meeting in camera on the morning of Sept. 22 and proceedings were not available to the public.

Dancho also said the committee will seek to find out why suspect Myles Sanderson had been “unlawfully at large” for three months after he stopped meeting with his case worker.

Ten people were killed and 18 others wounded in the stabbing rampage that occurred on Sept. 4 northeast of Saskatoon. Sanderson’s brother, Damien Sanderson, who was also a murder suspect, was also found dead on the First Nation.

Saskatchewan’s Chief Coroner Clive Weighill said two public inquests would be held, one focusing on the victims and the other on the death of Myles Sanderson in police custody a few days after the manhunt.

The RCMP says Sanderson went into medical distress after having been taken into custody on Sept. 7 and was later pronounced dead at the hospital.

Parliamentary committee studies typically involve calling stakeholders to testify. In this case, officials may be called from the Justice Department, the Parole board of Canada and its parent department Public Safety, and the RCMP.

After testimonies are collected, committee members draft a report and offer recommendations to the government. House rules state the government needs to provide a response within 120 days.