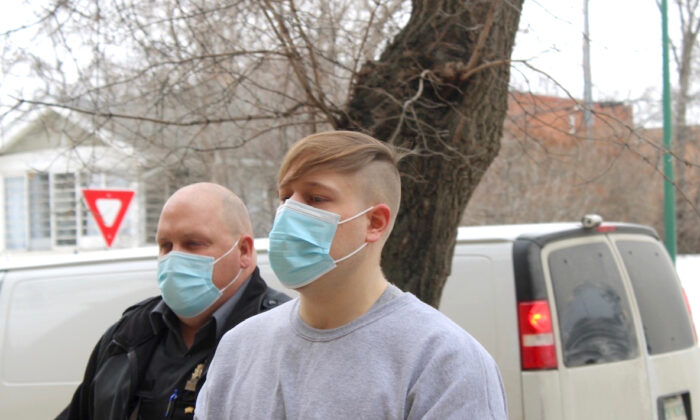 Nathaniel Carrier, accompanied by an unidentified sheriff, is seen exiting a police van on his way to Prince Albert Court of Queen's Bench on April 13, 2022. Carrier has been sentenced to life in prison with no chance of parole for 25 years for killing his parents and seven-year-old son in March 2020. He also pleaded guilty to the attempted murder of his daughter, who was five at the time. (The Canadian Press/Nigel Maxwell)
Canada

A Saskatchewan man who killed his parents and his seven-year-old son while leaving his daughter for dead has been sentenced to life in prison with no chance of parole for 25 years.

The court heard on April 13 that Carrier, who was convinced the COVID-19 pandemic would be the end of the world, had entered into a suicide pact with a woman he met online just days before the killings. They agreed they would kill themselves by driving head-on into a loaded logging truck.

Before meeting up with the women in La Ronge, Sask., Carrier was staying at his parents’ house to look after his children for the weekend as per a custody agreement with their mother.

Not wanting his children to suffer “with the loss of him,” Carrier decided to bring them along to the afterlife, according to a statement of facts read in Prince Albert Court of Queen’s Bench.

The statement said Carrier had disabled a security camera before killing his mother in her room and then proceeded to kill his father in the garage. The court heard both victims had their throats slashed and there were signs showing Carrier had beaten his father with a metal bat.

Carrier went into the children’s bedroom next and slit their throats. He then sent the woman one more text message saying he had done “the needful thing.”

The victims were discovered almost a full day later when Henry’s co-worker and friend came to visit, only to find her, along with her husband and son, dead in a pool of their blood.

Kendrah, despite having her throat cut, remained conscious in her bed. The girl was rushed to a local hospital before being transferred to Edmonton’s Stollery Children’s Hospital, where she would remain for almost two months for several surgeries.

The police found Carrier in La Ronge, where he had gone to carry out the suicide pact, and transferred him to a psychiatric unit.

Dozens of family members appeared in court for Carrier’s sentencing on April 13. Five victim impact statements were read, including that of the children’s mother, Heather Lynn Sumners, who recalled the deaths and the emotional turmoil she was in when she rushed to Edmonton to see her daughter.

Sumners said her daughter has been diagnosed with post-traumatic stress disorder and suffers nightmares.

“You took a piece of me and smashed it into a zillion pieces,” she told Carrier.

A pre-sentence report said Carrier had suicidal thoughts for 10 years and had become worse with the onset of the pandemic. He was also diagnosed as having schizophrenia. It said he never received or asked for help.

One of Carrier’s jobs at the time of the triple-homicide was as a custodian at a hospital, which he said had an impact on his mental health. He also said he was hearing voices, including that of his deceased grandmother, who told him to kill his family.

Defence lawyer Angus McLean advised the court that his client told him not to minimize in any way what had happened.

“There can be no excuses for what he’s done,” he said.

Carrier said he understood that nothing he could say would change what happened.

“But I just wanted everybody to know that I regret my decisions. I did the opposite thing of what I should have done and I’m going to spend the rest of my life thinking about that,” he said.

Carrier won’t be eligible for parole until 2045, about the time Kendrah turns 30.

He is also forbidden from having contact with Kendrah, Sumners, and her family.