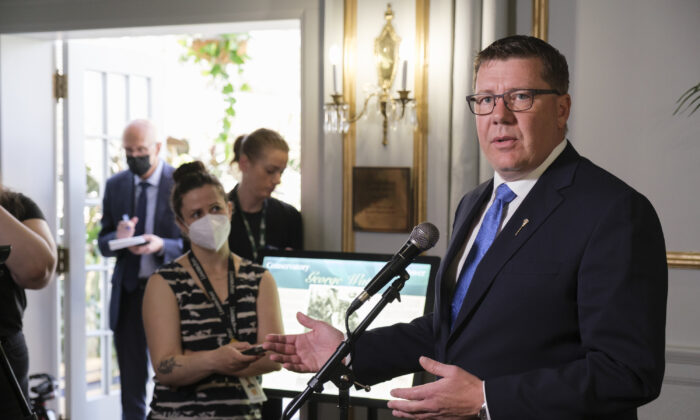 Premier Scott Moe speaks at a press conference at Government House in Regina on May 31, 2022. (The Canadian Press/Michael Bell)
Canada

Saskatchewan is demanding answers from federal Environment Minister Steven Guilbeault after receiving multiple reports from farmers that federal employees are “trespassing” on their lands to test water sources.

Premier Scott Moe took to Twitter on Aug. 21 demanding Guilbeault provide an explanation as to “why his department is trespassing on private land without the owners’ permission to take water samples from dugouts.”

“When approached by producers, these employees indicated that they were testing water sources for pesticide/nitrate levels,” the Aug. 21 letter said.

“The lands and water body, a producer’s dugout, are both privately owned. Government of Canada representatives did not request permission to enter from the landowner, nor did they seek permission to perform testing or advise landowners of any other purpose of necessity for attendance.”

We are demanding an explanation from federal Minister @s_guilbeault on why his department is trespassing on private land without the owners’ permission to take water samples from dugouts. We have received reports of this occurring in several places throughout Saskatchewan. pic.twitter.com/CDKUtSkPhM

Cockrill warned Guilbeault that staff sent by Ottawa will be prosecuted or arrested if they don’t seek permission to access private property. His letter cited Section 3 of Saskatchewan’s Trespass to Property Act: “3(1) Without the consent of the occupier of a premises, no person who is not acting under a right or authority conferred by law shall: (a) enter in or on the premises when entry is prohibited pursuant to this Act.”

Violation of the act would carry “significant consequences,” including fines of up to $200,000 and up to six months imprisonment, Cockrill stressed.

In his letter, Cockrill acknowledged the proposed establishment of a Canada Water Agency—in which the federal government will work with provinces and territories to come up with ways to keep fresh water “safe, clean, and well-managed.”

However, he reminded Guilbeault that water quality management still falls under provincial jurisdiction and that the federal government should not interfere with it.

“While consulting on the creation of a Canada Water Agency, your government indicated that it would not infringe on provincial jurisdiction but would work in collaboration with provincial governments,” the letter said.

“Your attempt at covert testing of water bodies on private lands in this manner, without collaborating with the Saskatchewan Water Security Agency or any Government of Saskatchewan ministry, has created unnecessary fear and disruption to our citizens while also displaying a disappointing act of bad faith.”

Environment and Climate Change Canada (ECCC) said in a statement that it is currently looking into the matter internally.

“[ECCC] has become aware of an incident that occurred on August 11, in Pense, Saskatchewan, where water scientists were taking samples very near a highway when a landowner approached the scientist to inform them that they were in fact on private land,” spokesperson Samantha Bayard said in a statement.

“ECCC is also looking into the other two locations, though have found no record of them so far.”

Bayard added that the department has been collecting samples in water bodies at targeted sites across Canada for Health Canada this year, but “no nitrates or other nutrients are being sampled as part of these sampling activities.”

“There are strict protocols in place that scientists must follow to ensure everything is in compliance with laws in the areas,” she said.

Editor’s note: This article was updated to add comments from Environment and Climate Change Canada.