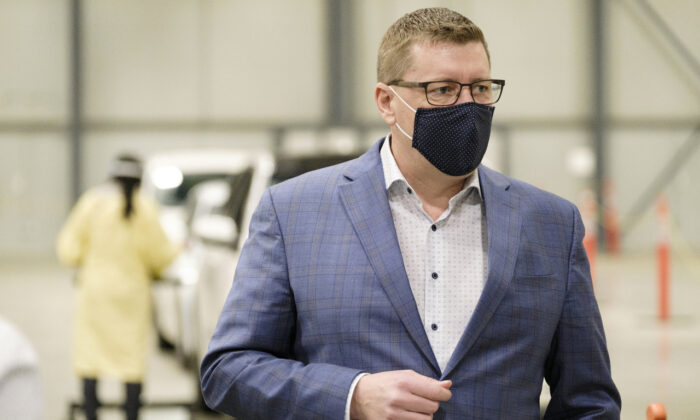 Saskatchewan Premier Scott Moe during a tour of the COVID-19 mass immunization clinic and drive-thru immunization space at International Trade Centre in Regina on Feb. 18, 2021. (The Canadian Press/Michael Bell)
Canada

Saskatchewan Premier Scott Moe says that the province will be introducing a proof of COVID-19 vaccination program.

Moe said on Sept. 16  that the fourth wave of the pandemic is “driven almost entirely” by the roughly 20 to 30 percent of the population who choose not to be vaccinated.

“As a government, we have been very patient, possibly too patient. The time for patience is over,” Moe said, adding that he will soon introduce measure aimed at “making it less comfortable to remain unvaccinated” in the province.

Moe said that starting on Sept. 17, the province will roll out an interim mandatory masking policy applicable at all public indoor spaces. He said the program would be lifted in late October, and be replaced with a full vaccination or negative test policy that will last for three to four weeks.

The proof of vaccination policy for accessing non-essential businesses is planned to come into effect on Oct. 1.

All provincial government employees will also be required to be vaccinated, or otherwise show proof of a negative COVID-19 test.

“These are not measures we wanted to implement, and as a government we have been patient in providing the opportunity and access to get vaccinations, but that patience has come to an end,” Moe said.

Moe said less than a week ago that vaccination would “remain a choice,” and that he believed creating a situation where there are two classes of citizens based on their vaccination status is a divisive path for a government to take.