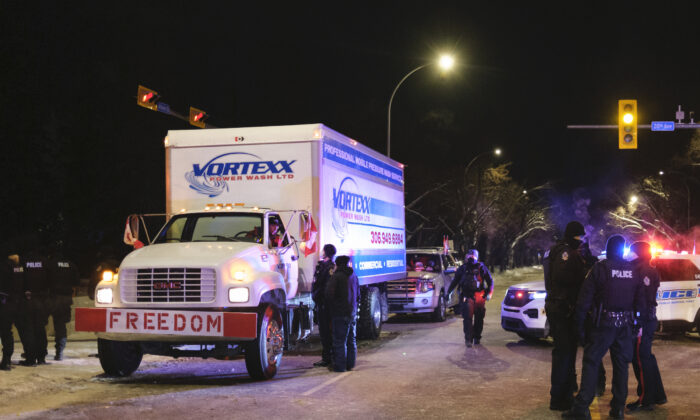 Police speak to the driver of a vehicle at a protest opposing pandemic public health orders near the Legislative Building in Regina on Feb. 6, 2022. (The Canadian Press/Michael Bell)
Canada

The Saskatchewan Court of King’s Bench has ruled that the province’s public health orders (PHOs) limiting the number of people allowed at outdoor protests were “justifiable” while acknowledging the order had violated sections of the charter protecting freedom of expression.

The Justice Centre for Constitutional Freedoms (JCCF), a constitutional rights advocacy group, said it is “disappointed” in the court ruling.

“We are reviewing the decision of the Court and will be seeking instructions from our clients regarding an appeal to the higher Court,” JCCF lawyer Marty Moore said in a Sept. 20 statement after the ruling.

Moore is co-representing two protesters in the case, Jasmin Grandel and Darrell Mills, who were ticketed for attending a peaceful outdoor demonstration on Dec. 19, 2020, opposing the government’s lockdown measures. The protest, held at the Vimy Memorial in Kiwanis Park in Saskatoon, exceeded Saskatchewan’s 10-person outdoor social gathering limit imposed at the height of the COVID-19 pandemic.

The provincial government banned outdoor gatherings with more than 10 people between Dec. 17, 2020 and May 30, 2021. Public indoor gatherings followed different capacity limit rules, which allowed some venues to operate with a percentage of their premises filled.

Over the 16-month period since the outbreak of the pandemic, Saskatchewan’s chief medical officer issued six PHOs limiting outdoor gatherings under the Emergency Planning Act. The maximum group sizes changed as the epidemic situations evolved, ranging from 10 people to 150 people before the restrictions were repealed on July 11, 2021.

JCCF said that its clients were ticketed for peacefully protesting government restrictions while noting that “there is no evidence that police issued tickets to those protesting other issues.”

“The Regina Police issued tickets to Ms. Grandel for numerous protests she attended in Regina, including protests with as few as 20 people in attendance,” JCCF’s release said.

“In contrast, on June 5, 2020, Regina Police Chief Evan Bray himself attended a large Black Lives Matter rally with hundreds of people and many other police officers, when the Government’s 10-person limit for outdoor gatherings was also in effect.”

Grandel and Mills filed court challenges against the COVID-19 PHOs, saying that they breached their charter-protected rights.

In his ruling, Justice Daniel Konkin acknowledged that Saskatchewan’s public health orders had violated section 2(b) of the charter on freedom of expression, while also saying that the provincial government “provided sufficient evidence to demonstrably justify” the order under section 1 of the charter that delineates reasonable limits.

“At no point was public protest prohibited,” Konkin added. “As long as there was physical distancing at protests, there was nothing hindering the applicants from organizing and participating in multiple outdoor gatherings of ten persons or less concurrently or consecutively.”

Konkin’s ruling noted that the province at the time had the highest COVID-19 infection rate in the country, and that no vaccines were yet available, making public health measures such as social gathering capacities “the only available interventions” to limit the spread of the disease.

“The health care system was overwhelmed,” Konkin said, adding that the orders limiting outdoor gatherings “helped to reduce the risk of overall COVID-19 transmission across Saskatchewan, even if any particular gathering might not necessarily have resulted in transmission.”

The Justice said his role “is not to settle scientific or medical debates presented by the experts,” while saying that “it is incongruous to conclude public health measures were politically fuelled.”

“I find that the enactment of the PHOs restricting outdoor gatherings was not politically driven as challenged by the applicants in argument,” he said. “This is a government that, for the most part, have a proclivity to foster personal rights and freedoms.”