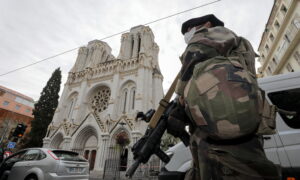 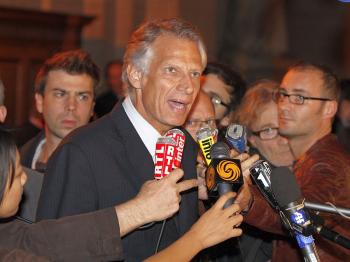 By Kremena Krumova
Print
SOFIA, Bulgaria—The “trial of the decade,” which saw former French Prime Minister Dominique de Villepin accused of trying to spoil the presidential campaign of Nicolas Sarkozy with a bogus list of corrupt VIPs in 2007, ended without a verdict on Oct. 23 in Paris.

Prosecutors declared de Villepin “an accomplice through silence" and called for an 18-month suspended sentence. They also asked judges to fine him 45,000 euros (US$67,676).

Prosecutors argued for a three-year sentence with 18 months suspended for Jean-Louis Gergorin, former vice president of the aerospace corporation EADS. He was charged with assisting de Villepin in creating a fake list of corrupt officials with the names of 100 VIPs, including Sarkozy’s.

Another defendant, Imad Lahoud, a computer expert, is faced with a maximum two-year sentence with six months suspended for falsifying documents in the smear scheme.

The third accused is the accountant Florian Bourges, who was charged for stealing documents later used to draft the fake list. He is likely to obtain a four-month suspended sentence.

The only other person charged in the scheme, Denis Robert, an investigative journalist, was acquitted.

The whole story began in 2004, when Dominique de Villepin was serving as foreign minister, while Nicolas Sarkozy was interior minister under then-President Jacques Chirac.

At that time, Sarkozy’s name appeared in the list of 100 VIPs’ bank accounts in the Luxembourg bank Clearstream, which was alleged to have been accepting bribes while selling French frigates to the Taiwanese.

Among the exposed was Dominique Strauss-Kahn, the head of the International Monetary Fund.

In 2006, one of the allegedly corrupt officials on the list, Jean-Louis Gergorin, from EADS, admitted that he handed the list to judicial authorities on orders by de Villepin and Chirac. Gergorin also testified that he had meetings with de Villepin in 2004, which the latter denied at the time.

Later, the list was ruled a forgery by a judge and the court started to investigate de Villepin’s role in the affair instead. Judges wanted to find out who was behind the list and whether the goal was to discredit Sarkozy.

De Villepin, who President Sarkozy called the “primary instigator” behind the campaign to thwart his presidential bid, has always denied any wrongdoing, claiming that he has been used as a scapegoat by the president in an act of political revenge.