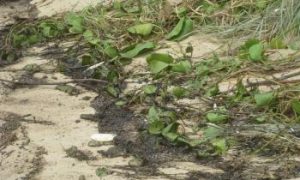 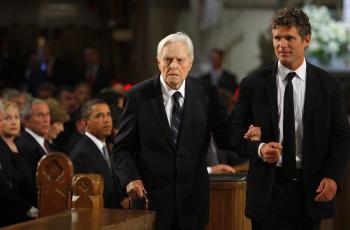 Sargent Shriver, former JFK aide and Peace Corps founder, died Tuesday at the age of 95. Above, Shriver (L) is accompanied by his son Anthony Kennedy Shriver (R) at the funeral services of Senator Edward Kennedy in a August 2009 file photo. (Brian Snyder-Pool/Getty Images)
US

By Mary Silver
Print
Sargent Shriver, an adviser to President John F. Kennedy, the Peace Corps founder, and a vice presidential nominee, died on Tuesday, Jan. 18 at the age of 95, media reports said.

A World War II Navy veteran, Shriver served as an aide to President John. F. Kennedy, spearheading such programs as VISTA (Volunteers in Service to America), Head Start, and Community Action. He created the Peace Corps in 1961, and served as its director from 1961 to 1965.

For his work in creating and sustaining these service organizations, Shriver won the Presidential Medal of Freedom in 1994. He also ran for Vice President under presidential nominee George McGovern in 1972.

In a statement, President Barack Obama said that he was “deeply saddened to learn about the passing of Sargent Shriver, one of the brightest lights of the greatest generation."

"Over the course of his long and distinguished career, Sarge came to embody the idea of public service,” Obama said.

President Bill Clinton, when he donned Shriver the Presidential Medal of Freedom in 1994, lauded his "energy, persuasion, and leadership."

“Robert Sargent Shriver has not only shared, but shaped, the action and passion of his times," Clinton said at the time.

"He released a torrent of creative energy. ‘Serve, serve, serve,’ Sargent Shriver told Americans, ‘because in the end, it will be the servants who save us all.’ His service has been our legacy of hope."

Shriver's wife of more than 50 years, Eunice Kennedy Shriver, died in August 2009. The couple are survived by their five children.