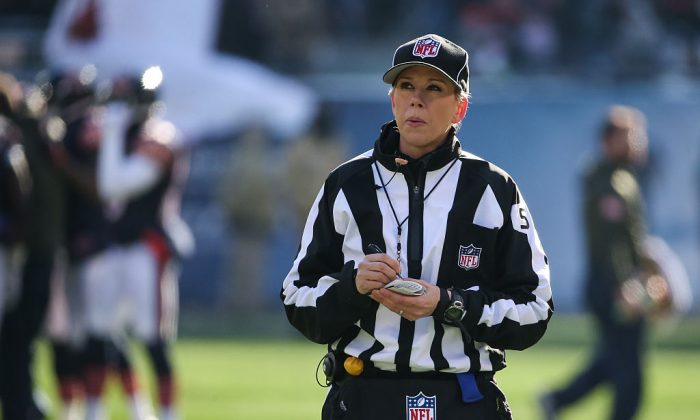 Line Judge Sarah Thomas #53 stands on the field during the NFL game between the Chicago Bears and the Denver Broncos at Soldier Field in Chicago, Illinois on Nov. 22, 2015. (Jonathan Daniel/Getty Images)
NFL

Sarah Thomas will become the first women to ever officiate an NFL playoff game when she steps onto a field on Jan. 13.

According to the NFL officiating blog, Thomas earned her first on-field postseason assignment, making her the first woman to do so. In 2018, Thomas was chosen as an alternate for one game but never made it to the field.

She’ll be part of the officiating crew for the San Diego Chargers-New England Patriots game Sunday.

Besides being an official, Thomas is a sales representative. Most NFL officials have day jobs; the referee, or top official for Sunday’s game, is an attorney.

Thomas of Mobile, Missippi, is a down judge. According to NFL Operations, a down judge stands on the side of the field near the sideline and has several responsibilities, including directing the crew that moves the chains, or the big yardstick.

The down judge also watches for offside and encroachment penalties, informs the referee of the current down, and rules on sideline plays on the nearest half of the field.

During the plays, the down judge determines when and if the runner is out of bounds, marks the runner’s forward progress (where the runner ended his run), watches for pass interference, and monitors the nearest receiver for the first seven yards.

When hired as the first female referee in the pro football league’s history in 2015, Thomas said that she was surprised.

“I was speechless,” the mother-of-three told reporters, according to CNN. She said she was honored to be considered a “trailblazer” for female officials but said she was focused on being the best official she could be.

“I’ve just been doing this truly because I love it,” she said. “The guys don’t think of me as a female, they see me as just another official.”

Mississippian Sarah Thomas will be on the sideline this weekend during the Chargers-Patriots game as the first woman to officiate an NFL playoff game! You go, Sarah! pic.twitter.com/W9JoMkSlz5

Dean Blandino, NFL vice president of officiating, said that officials had had an eye on Thomas for nine years.

“This is not something that happened overnight,” he said. “This is a testament to her and what she’s accomplished.”

Thomas attended a ceremony at the school she graduated from, Pascagoula High School, when it renamed its gym after her in 2016.

“The fans were great. Dads wanted to take pictures with me, moms and girls asked for my autograph. I never set out to be a role model,” she added.

Itching to watch the game between the @Chargers and the @Patriots on Sunday. Not a fan of both, but I will be rooting for Sarah Thomas, who will be the first woman in history to officiate an #NFLPlayoff game. That's #GirlPower unfolding. #Football #NFL #NFLWildCard #NFLPlayoffs pic.twitter.com/O8dpS8uPa7

Many people praised Thomas upon hearing the news.

“Itching to watch the game between the Chargers and the Patriots on Sunday. Not a fan of both, but I will be rooting for Sarah Thomas, who will be the first woman in history to officiate an NFL Playoff game. That’s Girl Power unfolding,” added Twitter user Jon Abu-Kpawoh.

“This is a big deal,” added Sam Rapoport, the NFL’s senior director of football development. “Did you know that our Senior VP of NFL Officiating, Al Riveron, changed the name of this position from “Head Linesman” to “Down Judge” to be inclusive of females? #progress.”