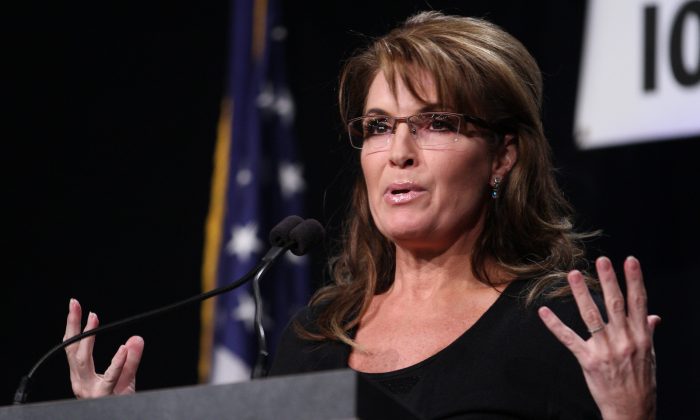 Sarah Palin did not “wonder” if missing Malaysia Airlines Flight MH 370 “flew directly to heaven,” as that is satire.

The Daily Currant published the fake report on Thursday, generating thousands of shares. The website is a satirical news website–similar to The Onion.

“Sarah Palin claimed today that Malaysia Flight 370 may have vanished because it mistakenly flew too high and ended up in heaven,” the Daily Currant article says, including fake quotes attributed to the former Alaska governor and vice-presidential candidate.

The satire continues: “The former Alaska governor stunned viewers with an unorthodox new theory that international investigators have so far ignored. ‘I see all these smarty pants people on CNN saying that it was terrorism or a fire in the cockpit,’ she explained to a bewildered Hannity, “but I don’t hear anyone talking about the God possibility. I mean what if they accidentally flew too high and go stuck up there?”

In its disclaimer, the Daily Currant explains what it is trying to do.

“The Daily Currant is an English language online satirical newspaper that covers global politics, business, technology, entertainment, science, health and media. It is accessible from over 190 countries worldwide – now including South Sudan,” reads the About section on the site. “Our mission is to ridicule the timid ignorance which obstructs our progress, and promote intelligence – which presses forward.”

“Our stories are purely fictional. However they are meant to address real-world issues through satire and often refer and link to real events happening in the world.”

However, on Facebook and Twitter, a large number of people shared the Currant article, apparently believing it’s real.