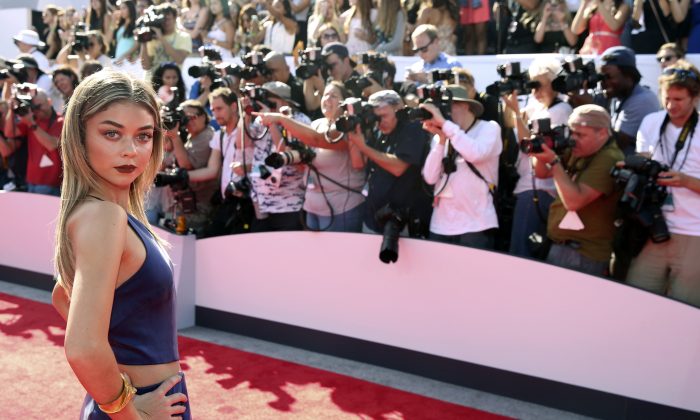 Sarah Hyland arrives at the MTV Video Music Awards at The Forum on Sunday, Aug. 24, 2014, in Inglewood, Calif. (Photo by Matt Sayles/Invision/AP)
Entertainment

Non-nude pictures of Modern Family actress Sarah Hyland have been posted in a possible update to the massive hack that left hundreds of previously private emerges on the Internet.

In one of the Reddit sections created following the shutdown of The Fappening, a user alerted others that pictures of Hyland had leaked.

The pictures are linked to on a new website that this user has been maintaining ever since the crackdown on parts of Reddit.

The four pictures, labeled “hyland partial set,” show the actress in photos that appear to be taken in private by herself of another person.

Unlike many of the pictures posted as part of the hack, Hyland is clothed in the photos.

That fact led users to slam the update as not worth their time.

“She shows more skin on Modern Family… It’s in HD too,” remarked one.

In another thread about the pictures, a user said that the pictures are not “leaks” but are actually from her public Photobucket account.

Users on Reddit and 4chan, among other websites, have been trying to find new pictures from the hack that haven’t been released, but nothing comparable to the original photos has emerged in over a week.

For those wondering, Modern Family season 6 is set to start on Wednesday, September 24.