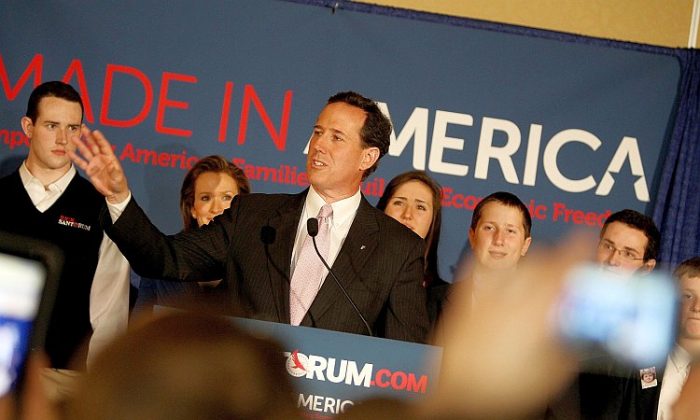 Rick Santorum has won the Alabama and Mississippi saying his campaign is “defying the odds” as it wins states across the country.

In a low turnout for the southern states, the former Pennsylvania senator won both Alabama and Mississippi in a three-horse race, leading with 35 percent of the vote to Newt Gingrich’s 33 percent and Romney’s 30 percent.

In Mississippi the results were even tighter, two percentage points separating Santorum from Gingrich with Romney third by one point.

The focus is now on the delegate count with the three candidates sharing the delegates from both states.

Fourth candidate Texas Gov. Ron Paul did not campaign in the southern states gaining under 5 percent of the vote, too little to pick up delegates.

“We did it again,” Santorum told supporters at his Lafayette headquarters in Louisiana.

Describing his campaign as a grass-roots movement, Santorum said it was “about ordinary people defying the odds,” and declared that he would win the nomination before the Republican National Convention in Tampa in August.

Santorum challenged the inevitability of Mitt Romney’s nomination as the Republican presidential candidate saying, “For someone who thinks this race is inevitable he is spending a whole lot of money against me to be inevitable.”

He told the crowd he would return to Louisiana the following week where he expected a huge win. Louisiana will hold a closed primary on March 24.

Santorum’s win was not unexpected, voters in the two Southern states are among the most evangelical of any states in the campaign to date. Exit polls identified 81 percent of voters in Mississippi as Evangelical or born again Christians, and three-quarters of voters in Alabama the same.

Mitt Romney indicated earlier in the week that he did not have high expectations of winning in the South but was focused on delegates.

“I realize it is a bit of an away game,” he said on WAPI radio in Birmingham, Ala., and added, “I am confident we are going to get some delegates.”

Santorum’s win will strengthen his argument that he should be the conservative candidate and Newt Gingrich should drop out. Gingrich has won only two states to date, South Carolina and his home state Georgia.

“People of Mississippi and Alabama want a conservative,” Santorum said on the eve of voting. “If they want a conservative nominee for sure, they can do that by lining up behind us and making this race clearly a two-person race outside of the South.”

Gingrich however has indicated he is not ready to drop out telling supporters in Birmingham, Ala., “I’ve stayed in this race for two reasons,” he said. “I do not believe the two other candidates can beat President Obama.”

While some are suggesting that Gingrich is a spoiler, splitting the conservative vote to Mitt Romney’s advantage, the Gingrich campaign argues that primaries coming up are in states that will be more sympathetic to the former house speaker, particularly Washington D.C., and Maryland where he now lives, and his wife’s home state Wisconsin.

Gingrich chose to focus on Romney in the lead up to the polls.

“As a front-runner nationally, he’s probably going to get a third or less of the delegates tonight. That’s a pretty weak showing from the so-called ‘front-runner,’ and I think it illustrates why this is going to go on a long time,” Gingrich said.

But Romney told Fox News that his rivals, particularly Santorum, would need to “pull off a miracle” to overtake him in the delegate count.

Romney is presently leading both Gingrich and Santorum by 200 secured delegates and will gain around a third of the 47 delegates from Alabama and 37 from Mississippi.

However, others in rival campaigns argue that even if they cannot beat him in delegate numbers, they can still prevent Romney from gaining the 1,144 delegates he needs to become the GOP nominee.

The Gingrich campaign said they would be campaigning Wednesday in Illinois, which holds an open primary March 20, and will then go to Louisiana on Thursday night to campaign for its closed primary March 24.

Santorum, meanwhile, will campaign in Puerto Rico Wednesday for the island’s primary on March 18, and will then head to Illinois.