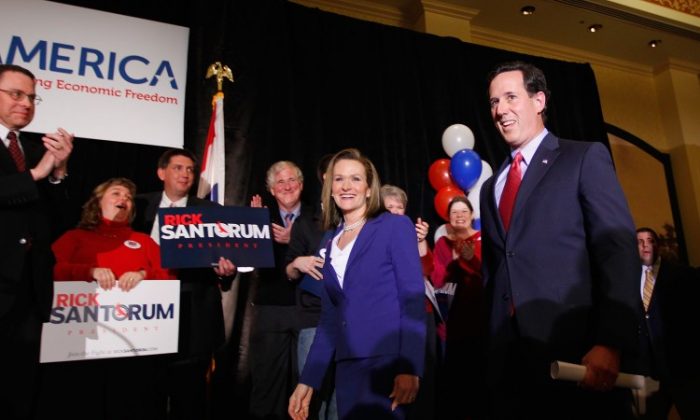 Rick Santorum has turned the tide in his favor, upsetting GOP frontrunner Mitt Romney and conservative hopeful Newt Gingrich by gaining a three-state victory in the Midwest.

Santorum’s win will bolster his claim that he is the only true conservative in the GOP race, the former Pennsylvania senator using his victory speech in St. Charles, Mo., to focus Republican voters on his nomination as the best bet for the presidential candidate in the general elections.

No delegates are to be awarded in Missouri—the primary was only a straw poll and delegates will be decided at the state convention March 17.

Around 240,000 voters turned out in Missouri, less than half the voters in Republican primaries four years ago.

In Minnesota and Colorado, turnout was also lower and, although 70 delegates will be available from Tuesday’s caucuses, the delegates will be nonbinding and awarded through state and district conventions later in the year.

Santorum’s wins in Missouri and Minnesota were a nod to the larger-than-average populations of Evangelical and Tea Party supporters in those states.

“Conservatism is alive and well in Missouri and Minnesota,” Santorum said earlier Tuesday evening, before the Colorado votes came in.

The win in Colorado, however, was the real prize with Public Policy Polls (PPP) showing Romney ahead by 10 points the week before the Tuesday caucuses.

“We felt it coming,” Santorum said on Fox & Friends, Wednesday morning. “We felt that people were understanding that we have the best record and the best vision to go up against President Obama. We will make him the issue in this race instead of what we saw [with] the bickering between two candidates who weren’t that different on the issues, unfortunately. They’re not that different from President Obama on the issues and people are realizing that.”

Santorum has now won four of the first eight primaries and caucuses, following his delayed victory over Romney in the Iowa caucuses on Jan. 3.

Romney was subdued following the results. The former Massachusetts governor had focused much of his campaign in Colorado, which he had won in 2008 with 60 percent of the vote.

“This was a good night for Rick Santorum. I want to congratulate Sen. Santorum and wish him the very best,” he told supporters in Denver. “We’ll keep on campaigning down the road, but I expect to become our nominee with your help.”

Ron Paul, who had predicted he would do better in the caucus states, had focused his campaign in Minnesota, Colorado, and also Maine, whose caucus results come out on Feb. 11.

“Nobody else is about to, at this point, jump ahead of Romney,” Paul said on CNN. “But we think we’re going to keep going. We have a very good chance on what’s happening up in Maine.”

Newt Gingrich was not on the ballot in Missouri but would have expected to do better in the more conservative Minnesota. He credited Santorum’s success to the fact the senator had not suffered an onslaught of negative advertising from the Romney camp, as Gingrich himself had.

“The guy who hasn’t been attacked has gained some ground and has done a good job, worked very hard, and so my prediction is when tonight’s over between Colorado, Minnesota, and Missouri, the whole race will be muddled and Romney’s role as the frontrunner will be deeply discounted as compared to where it was a week ago,” said Gingrich, speaking from Ohio.

Gingrich said Romney’s reputation as the expected winner of the GOP race was now questionable.

“I think the big story coming out tonight is that it’s very hard for the elite media to portray Gov. Romney as inevitable,” he said.

The next contests are in Arizona and Michigan, Feb. 28, where the former governor may do better. Romney won Michigan and placed second in Arizona in 2008.