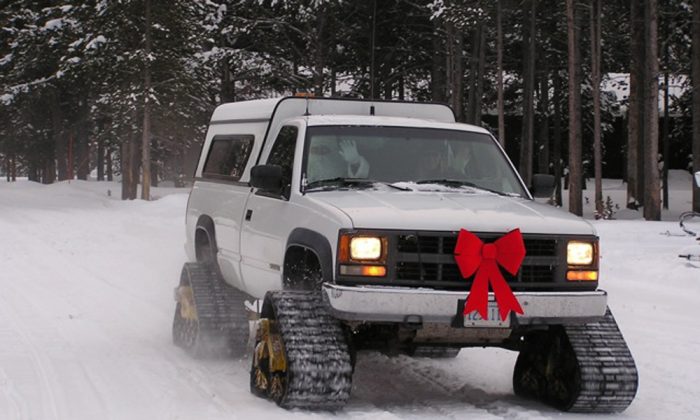 LIVINGSTON, Mont.—Rachel Cudmore loves her job in Yellowstone National Park, but every December, she loves it just a little bit more.

On Christmas Eve, Cudmore dresses up in a festive elf costume and escorts Santa to all the remote interior park locations where, with the exception of Old Faithful, which bustles with overnight guest lodging and other amenities, small crews of National Park Service employees spend the winter months.

“It’s one of the highlights of winter,” Cudmore said in a phone interview Tuesday from her office at park headquarters, Mammoth Hot Springs.

Yellowstone’s interior is closed to wheeled vehicles in the winter, so any transportation has to happen on a snowmobile, in a snowcoach, or in Santa’s case, in a big white Suburban outfitted with “mattracks,” large rubber tracks in place of the tires. Or, at least on an experimental basis this year, oversized tires designed to work in the snow.

Cudmore, a National Park Service employee, is the park’s Commercial Film Permits Coordinator, and in the winter, has additional duties as the winter courier. Once or twice a week it’s her job to deliver the mail to NPS employees who work at remote locations inside the park. The mail comes to Yellowstone’s main post office, located at Mammoth Hot Springs.

Cudmore said the locations, with the exception of Old Faithful, have about 20 or so people, including employees and family members.

On Christmas Eve, Cudmore decorates her vehicle — perhaps with a bright red bow on the front, or a string of lights — and she and Santa head out early for their roughly 150 mile round trip. She also delivers her homemade cookies.

Santa stops at all the locations where employees live — Norris, Canyon, Lake, West Thumb, Old Faithful and Madison — and at locations where park employees have children. He greets each child by name and distributes special gifts. This year there are four children of employees in the interior, Yellowstone spokeswoman Amy Bartlett said Tuesday.

The park children get a couple of extra treats.

“The parents send us photos ahead of time,” Cudmore said, so Santa can greet each child by name.

And Santa brings each of them a special gift, thanks to a little conspiring with parents in advance. The parents buy a gift, wrap it up, and sneak it into Santa’s hands when the kids aren’t looking. They sometimes hand the gift off the week before, so when Santa shows up, it will appear that the gift came straight from the North Pole.

One year a child at Canyon Village received a set of juggling bean bags. Santa, it turned out, just happened to be an expert juggler, and amazed the children with juggling feats, Cudmore laughed.

Santa’s red suit and boots have been filled the past few years by Cudmore’s beau, Doug Kraus, who works in the summer season as in the Yellowstone Wildland Fire Helitack program.

At 6 feet tall and a slim build, Cudmore jokes that Kraus doesn’t fit the profile of the typical Santa.

“I had to make him a pillow shirt so his pillow wouldn’t fall out,” she laughed.

Cudmore and Kraus make a public appearance at Old Faithful, where they’ll mingle with visitors on the boardwalk while they wait for Old Faithful to go off.

Visitors take photos of Santa or pose with him.

“Everyone is super excited,” Cudmore said.

Santa’s visits to the park interior started about 25 years ago, explained Tammy Wert, Yellowstone’s Visitor Services Office Manager. In those days, Santa drove a snowmobile, pulling a trailer with gifts and packages.

Santa doesn’t go out every year because some years, there aren’t any employees with children in the park.

Cudmore, who majored in photography at Montana State University, enjoys driving around the park in winter. She sees “tons” of wildlife — bison, coyotes, wolves, otters and there’s a fox in Hayden Valley she sees a lot, often out “mousing around.” She doesn’t have much time for taking photos, but sometimes she’ll take a break and have a snack if there’s something interesting going on.

On Christmas Eve morning, Cudmore and Kraus get an extra early start, looking forward to bringing Santa to the park children.

“It’s a chance to bring a little bit of magic while they still believe,” Cudmore said.