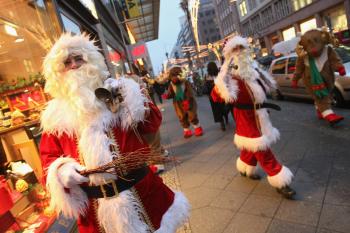 The group says that Santa has been hyped up too much and is simply "an invention of the advertising industry designed to boost sales,” according to the Daily Telegraph.

The commercialization of Santa should be cause for him to be replaced as he is "a representative of consumer society who has little to do with the historical figure of St Nicolas."

In his place, the organization says St. Nicolas, the patron saint of children, should take over. St. Nicolas is “a helper in need who reminds us to be kind, to think of our neighbors, and to give the gift of happiness.”

Santa Claus originates from the Dutch pronunciation of St. Nicolas, Sinterklaas. Author Washington Irving created the modern version. A German immigrant to the U.S. in 1863 first drew the red-garbed, round, and jolly version of Santa. The final touches on Santa were made when the artist Haddon Sundblom drew the currently known version of him for Coca-Cola.