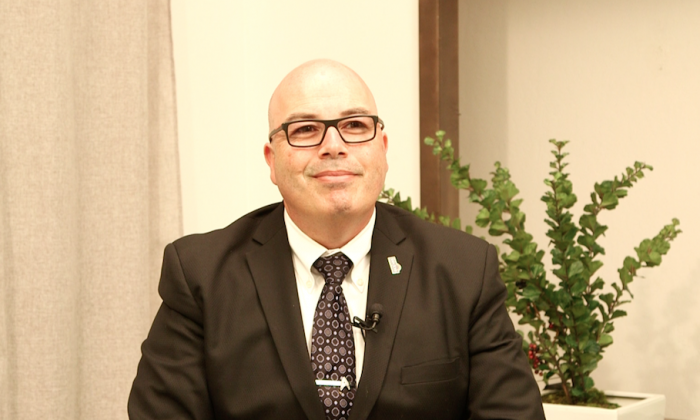 SAN JOSE, Calif.—A recent homicide in San Jose that was allegedly committed by an illegal immigrant has sparked debate over the sanctuary policy of Santa Clara County.

Carlos Arevalo Carranza is accused of stabbing Bambi Larson to death in her home on Feb. 28 in the Thousand Oaks neighborhood of South San Jose.

Police say Arevalo Carranza was caught on a surveillance camera walking down a street around 4:30 a.m. He entered the home where Larson, 59, lived alone with her cat and dog. According to police, he stabbed Larson to death, leaving her body on the bedroom floor covered in blood. Her body was later found by her son and a coworker.

Arevalo Carranza, a 24-year-old illegal immigrant who has had multiple arrests and detention requests from Immigration and Customs Enforcement (ICE), has been convicted of more than 10 crimes in the past three years in Los Angeles and Santa Clara County.

His crimes include burglary, battery of an officer, prowling and trespassing, and possession of methamphetamine, but he evaded immigration authorities on multiple occasions.

District 10 City Councilmember Johnny Khamis spoke with The Epoch Times about the impact this murder case has had on the local San Jose community.

“They were very scared at first. Now that the person has been apprehended, they feel a lot safer,” said Khamis.

Police were able to arrest Arevalo Carranza 11 days after the murder.

Khamis said part of the reason Arevalo Carranza has been set free each time after committing a crime lies in the current laws related to criminal activity and the county’s sanctuary policies.

“There’s a lot of problems with our laws. Our laws have swung too far to the side of the criminal with laws like Prop. 47 and 57 and 36. They have made violent felonies into nonviolent felonies and have allowed felons to serve a very short amount of time in prison,” said Khamis.

Arevalo Carranza had been charged for multiple crimes in the past, but was released from prison each time without the release being coordinated with immigration authorities.

“Eleven law enforcement agencies and our district attorney have written a letter asking the county to reexamine their policy and make it closer to the statewide policy, which is a sanctuary policy but does not apply for violent criminals,” Khamis said.

SB-54, also known as the California Values Act, makes California a sanctuary state by limiting how much local law enforcement can cooperate with federal authorities to enforce immigration law.

However, the statewide law states that cooperation with ICE immigration authorities should be followed if the “individual has been convicted of a serious or violent felony.”

“Well, our police are pretty upset that they actually catch these criminals—in that last case [with Larson], they caught [Arevalo Carranza] six times—and the legal system allows them to leave jail very quickly, and so the police are very concerned that they are doing their job; it’s just the justice system isn’t doing theirs,” said Khamis.

Khamis said San Jose doesn’t have control over the jails, as the jails are run by Santa Clara County. As such, these laws and policies are a countywide issue.

In 2011, Santa Clara County adopted an ordinance that allows the county to refuse requests from ICE to hold noncitizens in jail beyond their sentence for immigration agents to deport them.

Now Cortese plans to ask county officials to work with law enforcement agencies and community leaders to craft policy amendments, in which ICE would be notified of inmates convicted of violent felonies and have sufficient time to obtain arrest warrants before a serious offender is released from jail.

“It is long overdue for the County to reconsider its current policy of ignoring ICE hold requests for predatory felons, which undermines the safety of the very immigrant communities we collectively seek to protect,” Liccardo stated.