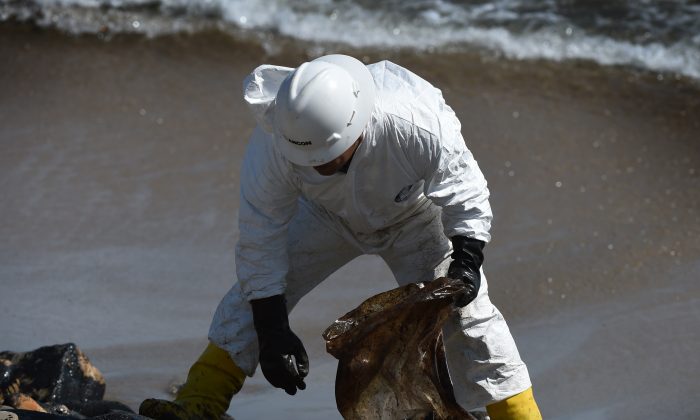 A worker cleans oil from the rocks and beach at Refugio State Beach in Goleta, Calif., near Santa Barbara and northwest of Los Angeles on May 22. (Mark Ralston/AFP/Getty Images)
Opinion

Last week an underground pipeline ruptured in Santa Barbara, California, spewing about 105,000 gallons of oil. A 9-mile slick coated birds, killed sea life, and blackened pristine beaches. The 28-year-old line was operated by Plains All America Pipeline—which has the fifth-worst safety and maintenance records out of the 1,700-plus U.S. operators.

A record number of oil pipeline spills have been in the news—including the 105,000 gallons spilled in Santa Barbara last week.

Nationwide, pipeline accidents are shockingly commonplace. Some leaks are small. Others are massive, like the 2010 rupture of Enbridge Energy’s “Line B” pipeline in Marshall, Michigan, the largest, costliest onshore oil spill in U.S. history. It spewed 843,000 gallons of highly polluting tar sands oil (bitumen) into a field and the Kalamazoo River. Some 40 miles of river remained closed for years because, unlike conventional crude, the heavy bitumen sinks, making cleanup difficult.

Two years ago, a 22-foot gash in ExxonMobil’s 65-year old Pegasus pipeline engulfed a Mayflower, Arkansas, neighborhood and nearby Lake Conway in 210,000 gallons of bitumen. Both the Mayflower and Marshall lines were known to have cracks before they failed. At a 2012 hearing on the Michigan spill, National Transportation Safety Board Chairman Deborah Hersman stated, “This investigation identified a complete breakdown of safety at Enbridge,” and likened employees’ poor handling of the rupture to “Keystone Kops.”

Other ExxonMobil pipeline spills include the 117,000 gallons of oil dumped into a coastal waterway near Baton Rouge, Louisiana, in 2012. The company fouled Montana’s pristine Yellowstone River twice, with 63,000 gallons in 2011 and 30,000 gallons this year. Sunoco’s Mid-Valley Pipeline running from Texas to Michigan has seen 40 incidents since 2006.

More than 100 “significant” spills occur yearly, but hundreds of smaller cracks and breaks occur along the nation’s 2.5 million miles of pipeline. The resulting property damage costs more than $6.3 billion over the past 20 years.

Oil spills contaminate waterways and land, kill wildlife, and sicken people. A spill produces caustic petrochemical fumes from volatile organic chemicals, toluene, benzene (a known carcinogen), and more. Gummy tar sands oil is even more toxic, since it must be thinned with any of 1,000 chemicals to make it flow through a pipe.

Citizens who lived near the Michigan and Arkansas spills reported similar symptoms: they vomited, had intestinal problems, and gasped for breath; suffered from exhaustion, migraines, dizzy spells, confusion, and nosebleeds; and developed skin rashes that resembled chemical burns. Research shows that even infinitesimal doses of some petrochemicals can have serious health effects. Children are particularly at risk.

Many corporations are ‘repurposing’ antiquated pipelines, rather than constructing new ones, to carry substances they weren’t designed for.

To meet the current oil boom—and skirt federal approvals and environmental impact studies—many corporations are “repurposing” antiquated pipelines rather than constructing new ones. Companies are using them to carry substances they weren’t designed for, running oil through lines built for natural gas and pumping thick bitumen at high pressure through pipes constructed for conventional oil. Half of those lines are at least 45 years old, are not built to current standards, and they’re deteriorating. They span major rivers, snake through cities, suburbs, farms, forests—and near shallow aquifers.

If wrapped around the equator, U.S. pipelines would circle the Earth more than 100 times. Federal regulators checked just one-fifth of them from 2006 to 2013. The agency tasked with oversight, the Department of Transportation’s Pipeline and Hazardous Materials Safety Administration (PHMSA) currently has just 139 inspectors—not enough.

An investigation by the Public Employees for Environmental Responsibility (PEER) found that from 2009 to 2013, the agency’s staff spent far more time with the petroleum industry than in the field. Personnel spent three times as many days attending 850 industry meetings and events as they did investigating 159 spills, and failed to scrutinize over 300 spills and explosions.

PEER also discovered that companies self-monitor the safety of their own pipelines—and PHMSA had no record of reviewing that inspection data. Companies wrote their own emergency response plans, none of which were either revised or rejected by government experts. PEER also found that the industry dictates its own pipeline routes, which means multiple lines often converge, raising risks for residents living near junctions.

In March, federal regulators quietly proposed the Hazardous Liquids Integrity Verification Process. It would require safety testing of about half the nation’s pipelines—and could require companies to replace old lines. The oil and pipeline industries have launched heavy lobbying efforts against it. But it must be approved, and PHMSA—a critical safety agency—needs to remedy its dereliction of duty.

However, as climate change gallops on, we need to focus on a larger goal than pipeline safety and a careless industry. We must swiftly wean the nation off fossil fuels—before we ravage all life on Earth.

Sharon Guynup is co-author of “Tigers Forever: Saving the World’s Most Endangered Big Cat” and is a frequent Blue Ridge Press contributor. © www.blueridgepress.com 2015.