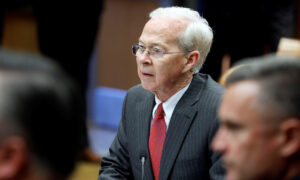 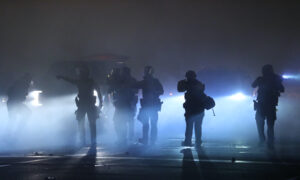 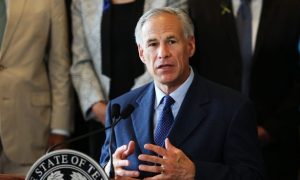 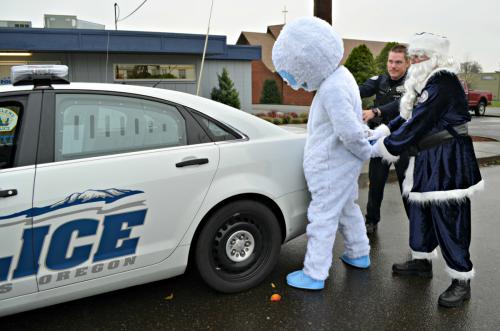 Officer Claus "arrested" Abominable Snowman on Dec. 18, 2017, as part of a campaign to crackdown on impaired driving. (St. Helens Police Department)
US News

Police “arrested” the Abominable Snowman on Monday, Dec. 18, as part of an increased effort to make people think twice before drinking and driving this holiday season.

Officers from the St. Helens Police Department are participating in a “high visibility enforcement” (HVE) campaign to “crackdown on drunk, drugged and high drivers” between Dec. 15 and Jan. 1, which police regard as “some of the most dangerous driving days of the year in the United States.”

“Impaired driving has become an increasingly dangerous occurrence in St. Helens during the winter holiday season,” Sgt. Jose Castilleja said in a statement. “Our goal is simple, to deter people from driving after they’ve been drinking or using drugs, including marijuana, in order to save lives.”

As part of the department’s impaired driving campaign, new honorary patrol officer, Officer Claus, made the “arrest” in the early hours of Monday morning “after receiving calls of a driver swerving between lanes on Columbia Boulevard and sideswiping a parked vehicle.”

Snowman, who admitted to drinking “a little too much peppermint schnapps” at a holiday party, was charged with DUI and reckless driving with a blood-alcohol level at .16 percent, twice the legal limit in Oregon.

“He thought that he would be okay to drive the short distance back to his house. Clearly, that was not the case,” Officer Claus said.

As many as 10,000 Americans die each year in alcohol-related crashes. Over a five-year period, almost 4,000 people died in drunk driving crashes during the month of December, according to the National Highway Traffic Safety Administration.

“Mr. Snowman is very lucky that more serious property damage or injury to a pedestrian or fellow driver did not occur,” Officer Claus said.

Oregon police joked that Snowman is due to appear in court on Dec. 20 and could face jail time and fines.

“We hope that he can be a lesson to anyone that may consider drinking and driving during the holidays,” Officer Claus added.

Columbia County law enforcement agencies have provided a number of important tips to keep people safe during the holiday season:

“Whatever you drive, whether it’s a sleigh or a car, be smart and safe this holiday season. If you’re impaired, you will be arrested,” said Sgt. Castilleja.