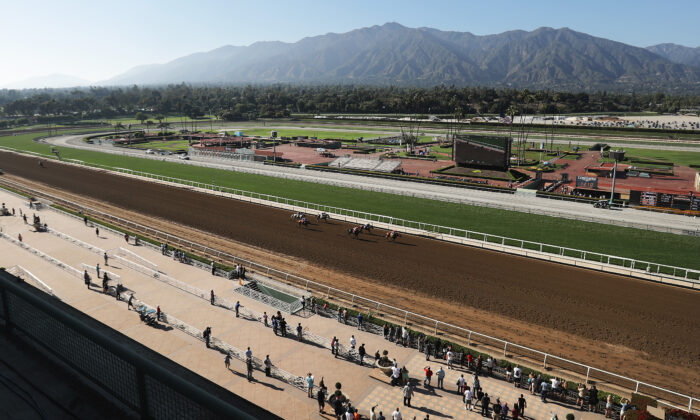 ARCADIA, Calif.—With racing completed in Santa Anita Park’s winter-spring season, track officials on June 21 hailed what they called major improvements in horse safety that made the facility the safest track in North America compared to those with similar racing and training activity.

According to track officials and California Horse Racing Board records, there were three racing fatalities at the track during the meet from among more than 4,800 starters, and no musculoskeletal racing fatalities occurred on the main dirt track.

The racing board’s records show a total of nine equine deaths at the track during the winter-spring season.

Park officials called the safety record a 62.5 percent improvement over the previous year, and a 74 percent improvement since the spring of 2019. A total of 42 horses died at the facility in 2019, sparking widespread debate about safety issues at the track and about horse racing in general. The uproar led to procedural and veterinary oversight changes at the park.

“These results highlight the efforts of the entire racing community to put the safety of the horse above all else,” Nate Newby, senior vice president and general manager of Santa Anita Park, said in a statement. “The diligence and dedication of the owners, trainers, jockeys, veterinarians and the hardworking men and women who care for the horses each day are truly revolutionizing the sport.

“We are especially indebted to our Santa Anita Park track crew, led by veteran Dennis Moore, whose tireless efforts have been instrumental in this success story. None of the protocols, however, work without our horseplayers who have backed this transformation, and we are grateful for their continued support.”

Park officials noted that Santa Anita is one of the largest year-round training facilities in the nation, the scene of more than 375,000 training sessions annually.

Racing will resume at Santa Ania on Sept. 30 for the five-week fall meet.