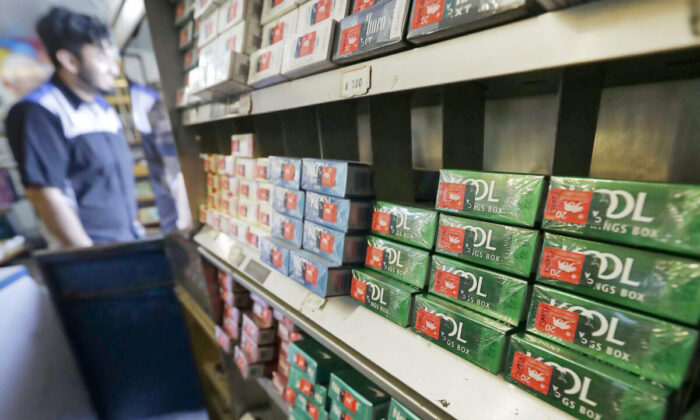 This file photo shows packs of menthol cigarettes and other tobacco products at a store in San Francisco, Calif., on May 17, 2018. (AP Photo/Jeff Chiu)
Southern California

SANTA ANA, Calif.—The Santa Ana City Council will vote on finalizing a full ban on the sale of flavored tobacco products on March 15 after months of discussion.

“We are in the midst of a huge tobacco use epidemic, [in] which tobacco companies are luring kids into [a] lifetime of nicotine addiction,” Councilwoman Nelida Mendoza said at a March 1 meeting.

If passed on March 15, the ordinance will go into effect 30 days after it’s signed by the mayor and attested by the city clerk—usually within a few days of the final vote, Santa Ana spokesperson Paul Eakins told The Epoch Times.

Mendoza originally proposed the ban in late December. In terms of what to ban and when to ban, the council had multiple options to consider.

The main options considered by the council include an immediate ban on the sale of all flavored tobacco products, an immediate ban excluding hookah, or a regular ordinance with either a full or partial ban—to exclude hookah—that requires a second reading to pass and takes effect about one month after being passed.

Some councilors have been worried a full ban would make it difficult for residents with specific cultural traditions to smoke hookah.

When discussing the possibility of preventing flavored tobacco products from getting into children’s hands without a ban, suggestions are also made for implementing stricter screening measures for flavored tobacco sales, such as the photo ID scanning required at cannabis retailers.

However, Mendoza argued on March 1 that stricter screening measures wouldn’t be effective.

On March 1, the council went with a full ban that requires a second reading and voted unanimously to approve the first reading of the ordinance, which would ban the sale of all flavored tobacco products, including hookah.

Mayor Pro Tempore Phil Bacerra said during the meeting that all flavored tobacco products were harmful and a full ban would protect the community.

“Whether it’s a hookah, whether it’s an old pipe, regardless of the apparatus is, regardless of where it is, does it cause harm? Yes or no,” Bacerra said. “It’s our obligation on this dais to try to protect those in our community when we can. I believe that this ban would do that.”

Voting in favor of a first reading would also allow for flavored tobacco store retailers to have a longer time span to sell their remaining goods and make a profit before the law becomes effective 30 days after the second reading.

“Many vendors especially small retailers buy stock in advance to sell, and so many of them might not have the opportunity to sell it back to the wholesaler or find other ways to get rid of it,” Councilwoman Thai Viet Phan said in support of a buffer period.

Some retailers and hookah organizations spoke in opposition to the ban and urged the council to vote against it.

“I’ve been in business for the last 15 years,” a local smoke shop owner said as he attempted to hold back his tears. “We’re really proud of having such a policy to control who is coming to the store.”

While the owner insisted his strict policies prevent flavored tobacco products from getting into the hands of minors, the council questioned the chances of various possibilities where the products could still circulate among youth.

Mayor Vincente Sarmiento further urged the residents and speakers that have advocated for the ban in the city to extend their efforts into neighboring cities where easy access to flavored tobacco is still possible for Santa Ana’s minors.

“We have invisible boundaries between cities,” Sarmiento said. “To the extent that you’re accomplishing something here, it’s very narrow.”