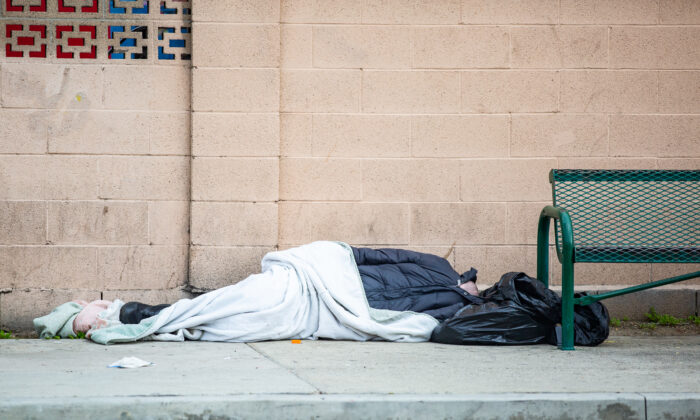 Orange County’s homeless residents are getting some protection from the winter with the reopening of a former Salvation Army thrift store that has been converted into a shelter.

The Santa Ana facility—which originally opened during the start of the COVID-19 pandemic last March—reopened its doors Feb. 8.

Up to 55 people will be allowed to sleep overnight at the shelter, where they will be given hospital-style cots, meals, showers, a television room, and restrooms.

To sleep at the shelter, residents must be picked up by shuttle from specific locations, to eliminate foot traffic, said Marie Chio, logistics manager for City Net, a nonprofit behind the shelter.

“We are in a neighborhood, there is some industrial, but right across the street, there’s a large apartment complex,” Chio told The Epoch Times. “And we also have a little complex right next door to us, so to eliminate foot traffic we have the three pickup locations, and the three drop off locations that were approved by the city.”

Pickup locations include Walnut Street at First Street by the social services building, which departs at 5:30 p.m. Another shuttle departing at 4:30 p.m. and 6:30 p.m. retrieves passengers from Flower Street, between 6th Street and Civic Center Drive.

When they arrive, guests are given dinner. They receive breakfast in the morning and, when they leave, are handed a to-go lunch.

Residents are transported back to their original pickup locations between 6 a.m. and 8 a.m.

Those staying in the shelter must wear a mask and social distance, and the shelter does on-site testing, Chio said.

“We have been very successful as far as our COVID cases. We had no cases up until December, and then we had a few cases,” she said. “We were doing onsite testing, and anybody who tests positive or who is listed as a risk of exposure, we refer them to the Illumination Foundation immediately, so that they can quarantine or isolate.”

The Illumination Foundation is another nonprofit that seeks to help homeless individuals.

City Net also helps the homeless with other challenges, such as obtaining identification, researching other housing options for the future, and getting their social security and other types of benefits they may qualify for.