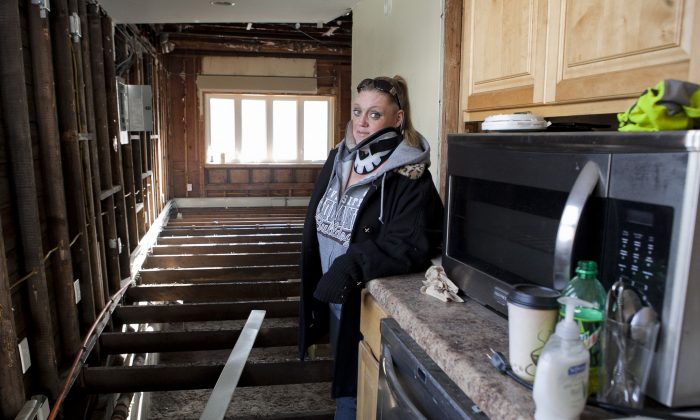 Stacey Walsh in her home in Broad Channel, Queens. About seven months after Sandy, she was seriously injured in a car crash that left her in a neck brace. (Samira Bouaou/Epoch Times)
New York

NEW YORK—As the icy wind swept across Jamaica Bay and blew through Broad Channel on Wednesday, John and Stacey Walsh took refuge in their tiny, one-story house on 14th Road.

The interior of the Walshes’ house was destroyed in Superstorm Sandy, and with only $80,000 in insurance payouts and $7,000 from FEMA, they don’t have financial resources enough to rebuild.

“It’s not a big house; it’s a small, modest house,” said John Walsh as he balanced on exposed wooden joists with rusting nails sticking out where floorboards rotted from Sandy floodwaters were ripped out. “But it’s home.”

Sandy struck New York on the evening of Oct. 29, causing a devastating 14-foot storm surge that flooded thousands of homes and businesses along the city’s coastal areas. The Walshes are one family among thousands who are still waiting for city help to repair their homes after the storm.

Their house is empty and cold, with little evidence that a happy family of four lived here for 12 years. There is a derelict microwave on a slab of kitchen counter in one corner. Almost every interior wall is gone, and a tub filled with debris that floated into it during Sandy sits forlornly in the middle of the empty space. Outside isn’t much better—just off the massive porch facing the channel that leads to the bay, three fishing boats owned by the family languish.

Despite current conditions, years of rich memories remain in the intimate community of 840 households.

The couple describes Broad Channel as a place where “everybody knows everybody.” It’s that rich community life that the family, which includes two daughters, ages 11 and 9, misses most.

“We had a lot of good parties on this deck,” said Stacey, who also describes their yard and its play equipment as a favorite hangout for the street’s dozen or so children under the age of 12.

But since Sandy, there are no parties on the deck, and for the second December in a row, there will be no Christmas at home.

There is only a serial nightmare of paperwork, logistics, appointments, and endless entreaties to insurance companies who won’t pay out what they owe on policy claims, according to the Walshes. They hope, however, that other avenues of assistance might come through, including the city’s Build it Back program.

On the advice of friends, the Walshes applied to Build it Back earlier this year. The program is using most of its $648 million in federal funds it allocated for housing. The program took applicants from June through October.

The Walsh family is one of about 22,000 households in New York City that are eligible for Build it Back funds to repair and rebuild their homes.

Nearly 1,000 Build it Back applicants have had a damage inspection, and about 200 have completed the entire intake and eligibility process and can review and choose a funding option, according to Dec. 2 testimony by Deputy Mayor Cas Holloway before the City Council.

“Our top and most immediate recovery priority is housing recovery,” testified Holloway.

Holloway’s testimony aside, there has been a notable absence of justifications from the mayor’s office in response to criticisms about the slow pace of Build it Back. Applicants regularly complain that they have no idea when they will get help.

The mayor’s office did not respond to repeated requests for an interview for this story.

Build it Back response times are prioritized in a way that speeds up the process for lower-income households. Even those considered to be Priority 1 category applicants (less than 80 percent of the area median income) aren’t expected to be able to start construction until about mid-January 2014, at the earliest.

For the Walshes, and the roughly 12,000 other non-Priority 1 households, July 2014 is the earliest the city will get back to them.

Whether Build it Back money comes through or not, the Walshes estimate they will be out of their house for at least a couple more years.

“I wasn’t looking to move,” said John Walsh from his temporary home in Dyker Heights, Brooklyn, where he and his wife are renting some rooms from a friend. “That wasn’t in the plans.”

Some elected officials have chastised the city for what they characterize as a failure to help New Yorkers recover and get back into their homes, though none as harshly as Staten Island Congressman Michael Grimm.

“These people … shouldn’t still be waiting for relief,” said Grimm on Dec. 19 from a Staten Island house in Midland Beach. “They shouldn’t have empty stockings on Christmas again.”

Grimm said that “the city took care of itself first” by putting $360 million toward $4.5 billion in infrastructure, damage, and other repair costs. As for the claim of putting housing recovery first, Grimm flatly disagrees.

“I have yet to find a person who is happy with Build it Back,” he said, adding that the program’s staff do not appear to be trained adequately for the work.

The house Grimm spoke from, owned by Nancy and Reuben Vazquez, has been undergoing repairs with the help of volunteer workers from a local Sandy relief group and about $90,000 in insurance and Federal Emergency Management Agency (FEMA) money.

It wasn’t until Dec. 18 that they heard from Build it Back representatives, who notified them that their house will be inspected and assessed for damage in two weeks.

According to Nancy, though, they felt they had to go ahead with repairs on their own schedule because they “just couldn’t wait anymore” for help from the city.

It hasn’t been easy.

Although the Vazquezes were victims of vandals who broke in and trashed some of the repair work just a couple of weeks back, they doggedly continued to work to get their sweet, ranch-style house into at least a semi-livable condition.

Reuben, a home improvement worker, has been putting in late nights so the couple and their three children, ages 23, 19, and 14, can come home for Christmas.

“All we need is the bathroom, and we have running water, and the heat just got turned on—that’s enough,” said Nancy, who added they plan to move back in by Dec. 22.

“We’ll be home for Christmas.”