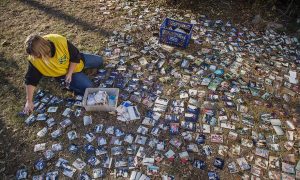 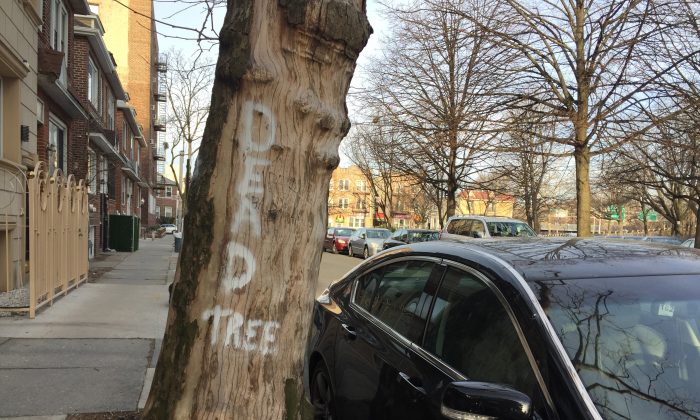 Why Some New Yorkers Won’t See Green Trees This Spring

It’s mid-April and the trees should have sprouted green buds by now, but in Sheepshead Bay, Brooklyn, spring looks apocalyptic.

Three years ago, Superstorm Sandy swept through the coastal neighborhood, pulling the Atlantic Ocean over city blocks as if it were a blanket. For those several hours until the water subsided, the saltwater soaked down into the roots of the neighborhood’s trees.

Today, dead trees stand along the sun-soaked avenues bordering the bay, in the parks lining Brighton Beach and Manhattan Beach, and in nearly every front yard.

Some of these bare-branched apparitions are still hanging on to life, but haven’t woken up to the season yet. Some are marked by the city for deletion using a green-painted “X” or small metal tags. Others are tagged “DEAD TREE” in white spray paint, probably the work of a rather literal-minded denizen.

Dead trees are the long-term blight left by the hurricane, a legacy that will continue to be felt in New York’s coastal communities for the foreseeable future.

An inquiry to the city’s parks department revealed that a single tree costs an average of $1,400 to replace. That sum covers the cost of the removal of the dead tree, the new tree, planting of the new tree, two years of watering, and administration costs associated with parks staff and contractors.

In the immediate aftermath of Sandy, almost 11,000 street trees and 9,000 park trees were destroyed. That’s $28 million in day-of-storm tree damages.

In the years since Sandy, the work continues. In Brooklyn alone, 48,000 trees have been inspected, once in the summer of 2013, and again in the summer of 2014, resulting in the removal of more than 2,500 storm-impacted trees. The Parks department’s crews do their inspections during the summer, when trees would be at their peak leaf-out, to be sure of their vitality or lack thereof.

Monitoring the health of storm-impacted trees will be an ongoing responsibility for at least another two years, especially along New York City’s 520 miles of coastline.

Jeremy Barrick, the city’s chief of forestry, has been with the department on and off since 2004. He said that before Sandy, he and his team had never seen an event that took such a toll on the city’s trees.

“The only thing comparable was in [Hurricane] Katrina, and we’ve been in touch with experts on Katrina,” Barrick said in a phone interview. “Sandy was like nothing we’d seen before in general. We knew that night that we’d be seeing lingering effects in the trees.”

What kills a tree is often not the storm itself.

To a tree, a storm like Sandy is more like having a really stressful month than getting fatally hit by a bus.

“A tree can take a long time to die,” Barrick explained. “They have the ability to store energy.”

To a tree, a storm like Sandy is more like having a really stressful month than getting fatally hit by a bus. Just like it’s easy for us humans to catch colds when the immune system is depressed, a tree that’s been ravaged by storms may be more susceptible to future threats, like pests.

“We look at it as a decline spiral,” Barrick said. The storm itself took out some trees that were already near the end of their spirals. Barrick’s team caught sight of these nonbloomers in the spring of 2013. Since then, every summer, crews have been surveying public trees in all five boroughs.

Their diagnosis centers on the percentage of a tree’s canopy. One hundred percent leaf-out means no problem, as does 75 percent. They also note the health of roots, trunks, leaves, and buds, as well as the tree’s structural stability, and whether it has any cavities.

“If you snap a twig and it’s green inside, there’s still life. Dead is dead. If you have only 25 percent canopy, you may be able to salvage it,” Barrick said. “But if it’s a street tree surrounded by concrete, you can only work with the soil so much.”

The city will only cut down a tree if it’s certifiably dead or too far gone. And for every tree cut down, at least one more full-grown tree will be planted nearby or in the same spot. The question is what types of trees to plant.

Climatologists estimate that storms such as Sandy will continue to happen—less frequently, but with increased intensity, according to a NASA article. Surely New Yorkers will not have the appetite to rip out thousands of trees every time such a storm hits. Thus it is important for the trees to be able to withstand severe conditions, including saltwater.

“No tree loves salt, but some are more salt-resistant than others,” Barrick said. So far Barrick’s team has studied 75 species for suitability.

According to the latest estimate from 2005, over half of the trees on New York City streets belong to five species: London planetree, known for its camouflage-patterned bark; Norway maple with its low and bushy foliage; callery pear, which infamously smells like semen when it blooms; the thorny honey locust, and pin oak, with its incised leaves. Of these, the best performing trees post-Sandy are honey locust, pin oak, and callery pear. Expect to see more of them on the streets as replanting continues.

Because private citizens occasionally plant on the street without the city’s knowledge, a TreesCount census is scheduled every 10 years to identify the type and location of every public tree in the city. The next one is scheduled for this summer. In addition to providing the city with up-to-date data about the natural urban environment, the event helps to raise awareness among New Yorkers about tree care and encourage engagement.

“New York City has one of the most well-stocked urban forests,” Barrick said. “Our job is to continue to replant, and do so at a 2-to-1 ratio so that when these events do happen, we have resiliency and still have trees in the end.”

FEMA names flooding as the most frequent and costly type of disaster in the United States. Its latest flood map was created 30 years ago, and the agency is in the final stages of developing new maps to reflect current flood risk. It’s expected to name more areas as flood-prone, thus increasing insurance premiums in those areas.

Meanwhile, on April 1, the federal government stopped subsidizing flood insurance for lack of funds, putting the onus on homeowners.

Over 400,000 New Yorkers live in areas designated in 2013 as high-risk floodplains, according to a report by Center for NYC Neighborhoods, a housing nonprofit. When many of them moved in, flood insurance wasn’t required—leaving many not covered against repair expenses.

When the storm came everybody knew the trees were going to die.
— Judy Baron, president, Manhattan Beach Community Group

Out in Manhattan Beach, Judy Baron, like many of her neighbors, is still rebuilding damaged parts of her property.

“It’s difficult to have repairmen in the house daily,” she said. Baron is president of the Manhattan Beach Community Group. Her neighborhood was one of the hardest hit on the night of Sandy’s landfall in New York.

Sitting across the narrow harbor from Sheepshead Bay, Manhattan Beach is a candy box of tastefully painted houses, each unique design as charming as the next. The residents here take great pride in their immaculately cared-for lawns and gardens.

“I know I lost two big beautiful linden trees in front of my house [due to Sandy],” Baron said. “When the storm came everybody knew the trees were going to die. It’s too sad. It’s still hard for me to talk about.”

With all the major decisions facing floodplain residents, the sight of dead trees should be the least of their problems. But it is still devastating for the simple fact that as long as dead trees stand, stark and naked against an otherwise lush streetscape, they remain a constant reminder of a dreadful storm, and the threat of more to come.

Dan Lambe, president of the Arbor Day Foundation expressed the relationship between trees and their communities in a press statement announcing Arbor Day, April 24, 2015: “Disasters such as wildfires, tornadoes, windstorms, and floods wreak havoc upon both our physical and emotional landscapes. The comfort and security—the sense of place provided by our trees—is dramatically altered, and sometimes even erased. New trees bring hope and are part of the holistic recovery of a community following a natural disaster.”

Meanwhile, as the city makes good on its long project of recovering New York’s urban forest, it’s an unsettling walk home for Baron and 400,000 other New Yorkers.

– Participate in TreeCount this summer to help the city catalog every public tree.
nycgovparks.org/trees/treescount

– Water your street tree to help flush out remaining salt.

– If you want to make sure a street tree is replanted, call 311 to make a request.