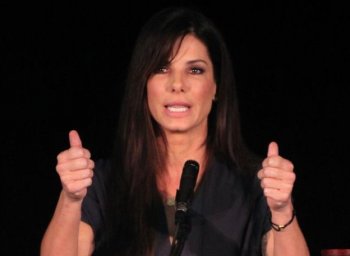 Bullock called him the “crown prince,” as everybody in her family is female, including the pets.

"We don't have any boys in our family. Boy, is everyone really happy about that,” she said on the show, calling her seven-month-old from New Orleans a “little Cajun cookie.”

The adoption process started four years ago and concluded earlier this year. "I did not circumvent," the actress said on the television interview, according to MTV.com.

"I wanted to do everything exactly the same way everyone else did. And it was. He was always mine, you know," she said. "It wasn't like I felt like someone was going to take him away. But it was nice to have someone say, 'I think you're a fit parent.' … I think everything works out the way the universe wants it to work out."

Sandra Bullock visited New Orleans this week for the official introduction of a health clinic she helped to fund, marking the fifth anniversary of Hurricane Katrina.