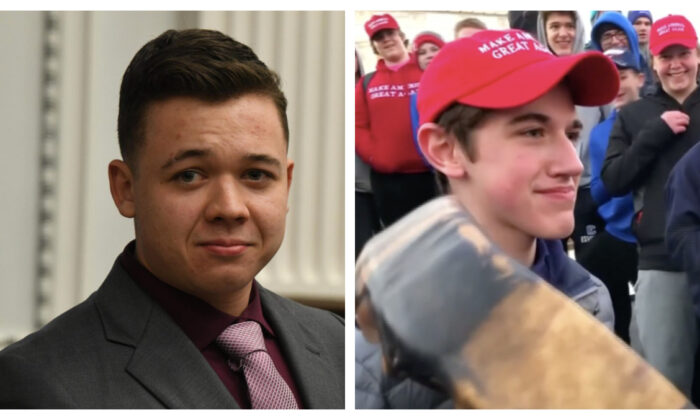 Kyle Rittenhouse looks on after a break during his trial in Kenosha, Wis., on Nov. 9, 2021. Nick Sandmann from Covington Catholic High School stands in front of Native American activist Nathan Phillips while the latter bangs a drum in his face in Washington on Jan. 18, 2019. (Kaya Taitano via Reuters; Mark Hertzberg/Pool/Getty Images)
Media & Big Tech

A lawyer who represented Covington Catholic student Nicholas Sandmann in his defamation lawsuits said he has joined Kyle Rittenhouse’s legal team, stating there will be at least 10 suits filed against companies and prominent figures.

“I’ve been hired to head the effort to determine whom to sue, when to sue, where to sue,” Todd McMurtry, Rittenhouse’s new lawyer, told Fox News on Thursday.

Without elaborating on what companies or individuals might be sued, he added, “We’re going to look at everything that’s been said, determine which of those comments are legally actionable, and proceed from there.” In the interview, he confirmed between 10 and 15 “solid cases.”

Rittenhouse was acquitted on two counts of homicide, one count of attempted homicide, and other charges in connection to the fatal shooting of two men and another during riots and often violent protests in August 2020. His lawyers said that video footage—which showed the three chasing and attacking Rittenhouse—confirmed that he acted in self-defense.

McMurtry singled out Facebook and Meta CEO Mark Zuckerberg, saying the social media firm issued a “factually false” designation that the Rittenhouse-involved shooting was a “mass murder” incident. When the company issued that designation, it was decried by the Wall Street Journal’s editorial board as an “alarming resort to censorship.”

The Epoch Times has contacted Facebook for comment. In late 2021, after Rittenhouse was acquitted, Facebook reversed one of its policies on the Rittenhouse case, with a spokesperson telling news outlets that it “will no longer remove content containing praise or support of Rittenhouse.”

Meanwhile, in proving damages for Rittenhouse, McMurtry told Fox that the teen “can prove that his job prospects are permanently diminished” by the companies and individuals he may sue.

“Not to mention what they call perpetual reputational harm, which means that Kyle is never going to have an interaction with anybody where they don’t know who he is. And this is going to follow him around for the rest of his life,” he said.

McMurtry represented Sandmann after he filed defamation lawsuits against a number of legacy news outlets, including CNN and NBC, after a video showed him in the midst of a confrontation with a Native American activist.

Sandmann has since reached settlements with NBC, CNN, and the Washington Post after reports, citing heavily edited viral videos that claimed he and other teens harassed the activist in early 2019. But the full video showed that it was the activist, Nathan Phillips, who approached the teens as he was chanting and beating a drum while Sandmann stood still and slightly smiled.