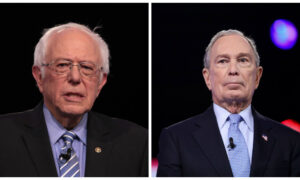 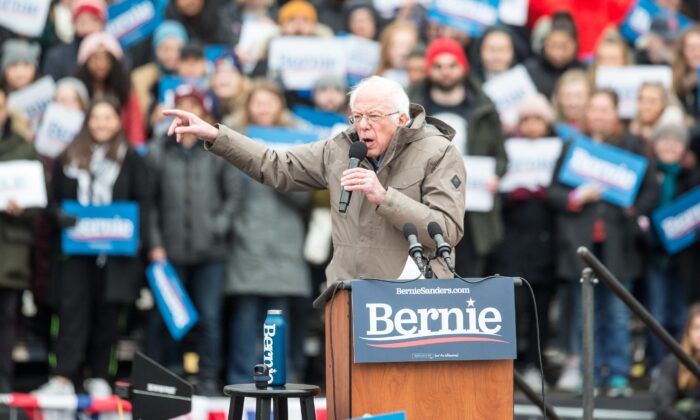 Polls Suggest Sanders Will Capture the Most Super Tuesday Delegates

Presidential candidate Sen. Bernie Sanders (I-Vt.) is likely to receive most of the more than 1,300 Democratic delegates about to be pledged in Super Tuesday voting, polls show.

While Sanders’s main opponent, former Vice President Joe Biden, may win some of the 14 primaries and one caucus scheduled for March 3, Sanders leads polling in most of the states with larger delegate counts, particularly California, where 415 delegates are to be won, and Texas, which will pledge 228 delegates.

Sanders has polled at about 34 percent in California recently and roughly 30 percent in Texas. He’s also leading in Virginia (99 delegates), Massachusetts (91 delegates), and Colorado (67 delegates).

Biden, on the other hand, only has a lead in North Carolina (110 delegates)—around 25 percent to Sanders’s 23. Biden will be seeking to gain momentum after a big victory in South Carolina, which he won by more than 28 percentage points over Sanders. The RealClearPolitics recent poll average had shown him with a 15-point edge.

The polls don’t give much hope to the other candidates. Under Democratic Party rules, a candidate needs at least 15 percent of the vote to gain any delegates. Sen. Elizabeth Warren (D-Mass.) is peaking above that threshold in California, Massachusetts, and Colorado, but is trailing Sanders, even in her home state, where he leads with about 25 percent to her 21.

Billionaire and former New York Mayor Michael Bloomberg, who is appearing on ballots for the first time in the Super Tuesday contests, is doing well enough in polls to suggest he may collect some delegates in Virginia, Texas, and North Carolina.

Sen. Amy Klobuchar (D-Minn.) dropped out of the race on March 2. She had polled well in her home state, where she was leading the pack at about 29 percent.

While former South Bend, Indiana, Mayor Pete Buttigieg got first place in the Iowa caucuses and a tie in New Hampshire, recent poll averages showed him falling short of the 15 percent mark in all the largest Super Tuesday states. On March 1, he announced his exit from the race.

Sanders currently holds a delegate lead with 60 pledged so far, mainly due to his win in Nevada. Biden is second with 54 delegates and Buttigieg is third with 26.

While Sanders may solidify his delegate lead on March 3, he’ll still have a long way to go to secure the nomination, which would require obtaining a majority of pledged delegates (at least 1,991).

If no candidate has enough delegates to secure the nomination by the July 13-16 Democratic convention in Milwaukee and if no nominee is selected in the first round of delegate voting, that would trigger a contested convention. That means delegates could engage in multiple rounds of voting, a process that could ultimately lead to a nominee who had fewer delegates than the incoming leader.

Biden has said he would contest the nomination if no one gets the majority of delegates by the convention, even if Sanders ends up with more delegates.

Update: The article has been updated to reflect that Pete Buttigieg and Sen. Amy Klobuchar (D-Minn.) dropped out of the presidential race.