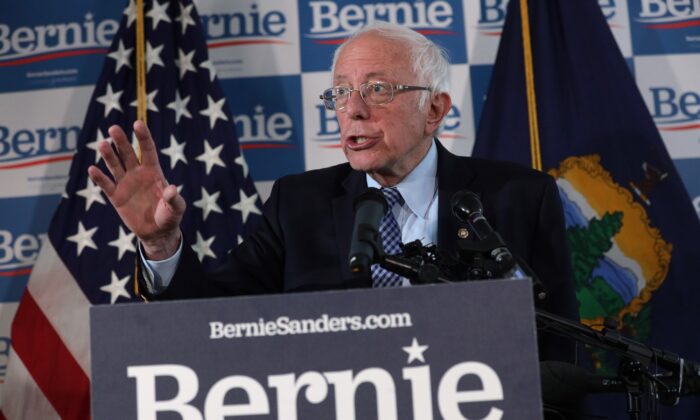 Sen. Bernie Sanders (I-Vt.) said he’d drop out of the 2020 race if former Vice President Joe Biden had the most delegates going into the Democratic National Convention in July.

Delegates are awarded based on vote counts in states.

“If Biden walks into the convention, or at the end of the process, has more votes than me, he’s the winner,” Sanders said on Wednesday night during an appearance on MSNBC’s “The Rachel Maddow Show.”

If a contender ends up with a plurality of votes but a brokered convention takes place, Sanders said, it would be a “real disaster for the Democratic party.”

“People would say ‘the person who won the most votes didn’t get selected.’ Not a good idea,” he said.

A brokered convention, which would likely take place if no candidate wins a majority of the delegates, involves additional rounds of voting. Superdelegates, who aren’t involved in the initial round, join the fray. The automatic delegates are usually a mix of elected officials from the state they’re representing.

Sanders last month was the only Democratic candidate at a debate to express support for the idea that the candidate who has the plurality of votes heading into the Democratic National Convention should automatically get the nomination.

When a moderator floated the scenario of no candidates with a majority heading into the convention, Sanders noted the involvement of superdelegates before telling the audience, “The person who has the most votes should become the nominee.”

Declaring the candidate with the most delegates the winner would represent “the will of the people,” the senator added.

Biden that week said that the additional rounds of voting should happen if no candidate has a majority of the delegates.

“Say you got to get over 1,900 delegates, that’s the deal,” Biden said during a CNN town hall, referring to the number a candidate can reach to get the party’s nomination without resorting to a brokered convention.

“So let’s say someone comes with the most delegates and it gets split up and they got a thousand delegates and the rest are split. Does that mean you should go ahead and change the rules? I don’t think so. I guess I’m a Catholic school kid. You play by the rules,” he said.

Biden defended superdelegates, adding, “There is an awful lot of Democrats who show up at that convention who worked really hard to be involved in the party and giving everybody a chance.”

The Democratic National Convention is scheduled to take place in Milwaukee, Wisconsin, in July.