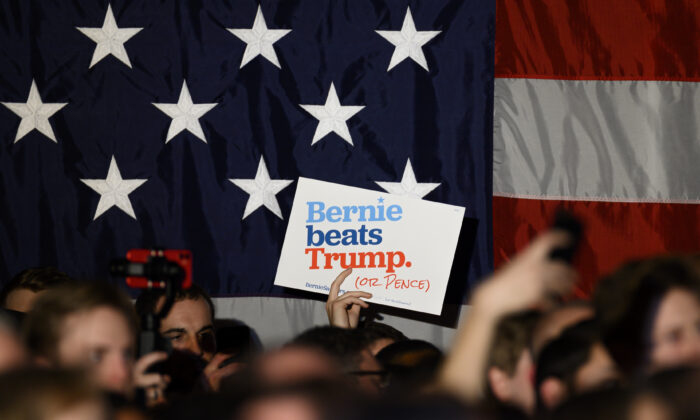 Kyle Jurek, an Iowa field organizer for Democratic presidential candidate Sen. Bernie Sanders (I-Vt.), has been caught on camera promising violence against police officers and destruction in general if Trump gets reelected or even if Sanders fails to secure the Democratic nomination.

He also mused about throwing Trump supporters in “gulags”—forced labor camps—for “re-education” and opined that Sanders’ “free education” plans are a part of such a “re-education” effort.

Some opponents of his revolution, which he said he was eager to start, would be outright executed, he said.

Federal financial disclosures show that Jurek was paid more than $10,000 by the Sanders campaign between July and September 2019. The numbers for the fourth quarter of 2019 haven’t been released yet.

The Sanders campaign and Jurek didn’t respond to requests for comment.

If Trump gets reelected, “cities [will] burn,” Jurek told an undercover reporter from Project Veritas Action, an investigative journalism nonprofit.

Violence may erupt as early as during the Democratic National Convention (DNC) scheduled on July 13–16 in Milwaukee—in the case where Sanders doesn’t win the nomination.

“If Bernie doesn’t get the nomination or it goes to a second round at the DNC convention, [expletive] Milwaukee will burn,” Jurek said, saying at one point that the senator’s supporters like him have “nothing else left to lose” if “they [expletive] take Bernie from us.”

The Democratic nominee selection would go to the second round in case no candidate secures a majority of party delegates in the first round of voting, which hasn’t happened since 1952. Under new DNC rules, the party superdelegates, who can pick whichever candidate they want regardless of the primary results, won’t be allowed to vote in the first round “if their votes could affect the result.”

Some Sanders supporters believe the superdelegates would snub Sanders and pick a more pro-establishment candidate, such as former Vice President Joe Biden.

In Jurek’s view, sidelining Sanders would lead to violence not just in Milwaukee.

“It will start in Milwaukee and … when the police push back on that, other cities will just [expletive]—” he said, making an explosion sound and gesture.

Jurek likened his prediction to the 1968 protests during the DNC convention in Chicago. Organized by the anarcho-communist Youth International Party, the protests led to clashes with police, with several hundred police officers and protesters suffering mostly minor injuries.

“The cops are going to be the ones that are getting [expletive] beaten in Milwaukee,” he added.

“They’re going to call up the National Guard for that [expletive]. I promise you that.”

Jurek also laid out a Soviet-style plan to deal with opponents of his policy preferences.

“What are we going to do with the people that resist the change. Because that’s a big deal,” the reporter asked.

“Well, I’ll tell you what, in Cuba, what did they do to reactionaries?” Jurek said.

“They shot them on the beach,” the reporter said.

Jurek nodded. “Do you want to fight against the revolution? You’re going to die for it, [expletive].”

Another option would be “re-education.”

“There’s a reason Joseph Stalin had gulags, right?” he said in a conversation on whether some Trump supporters could be “re-educated.”

He likened it to the efforts in post-World War II Germany to counter Nazi propaganda among the populace.

“That’s kind of what all Bernie’s whole [expletive] like ‘hey, free education for everybody’—because we’re going to have to teach you not to be a [expletive] Nazi,” he said.

Jurek argued that gulags, the Soviet web of forced labor camps, “were a lot better than what the CIA has told us that they were.” Their prisoners received “re-education” while getting paid a “living wage” and getting ”conjugal visits,” he said.

Gulags were some of the most savage methods Soviet communists used to eliminate their political opponents or anybody the regime found inconvenient. Torture and killings were common in the camps. So was starving to death.

Jurek made clear that many influential people and entities on the left wouldn’t be safe from the violence either.

“The billionaire class. The [expletive] media, the pundits. Walk into that MSNBC studios, drag those [expletive] out by their hair, and light them on fire in the streets,” he said.

“[Liberal] guys like that. What are we going to do with them?” the reporter asked at one point.

Jurek said that Trump supporters “are scared [expletive] senseless by anti-fascists,” referring to the “Antifa” group closely tied to the communist and quasi-Marxist movements. According to the Homeland Security Department, Antifa is engaged in “domestic terroristic violence.”

Placing himself in the Antifa ranks, Jurek defended the group’s violence, saying that “free speech has consequences.”

“If your speech is calling for the elimination of people based on race or gender or religious, like, for whatever reason, things that people can’t change, then you should expect a violent reaction, and you deserve a violent reaction,” he said.

In views commonly expressed by Antifa adherents, statements like “there are only two genders” are de facto calls for the elimination of people because, in their view, such statements deny the experiences of people who consider themselves neither male nor female.

By such logic, prominent mainstream conservatives supporting traditional views on men and women have been targeted by Antifa and labeled “fascist” and “Nazis.”

Jurek appears to have been motivated, at least in part, by concerns that man-made emissions of carbon dioxide will imminently lead to catastrophic global warming and the demise of human civilization.

“We don’t have a lot of time left. We have to save [expletive] human civilization,” he said. “And obviously Trump don’t give two [expletive] about making sure the world doesn’t burn.”

Some climate scientists, even among those making dire predictions about the effects of carbon emissions, have pushed back against doomsday messaging around the issue. They’ve emphasized that there’s no specific deadline, and even if the more severe current predictions materialize, human civilization may suffer significant damage, but not destruction.

Jurek was arrested in September 2019 for offenses including illegal prescription drug possession. He was arrested again on Jan. 7 for driving under the influence for the second time and other offenses, including possession of drug paraphernalia and violating his probation, according to Polk County Sheriff’s Office. He was released on Jan. 13.