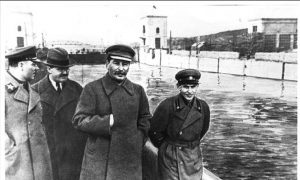 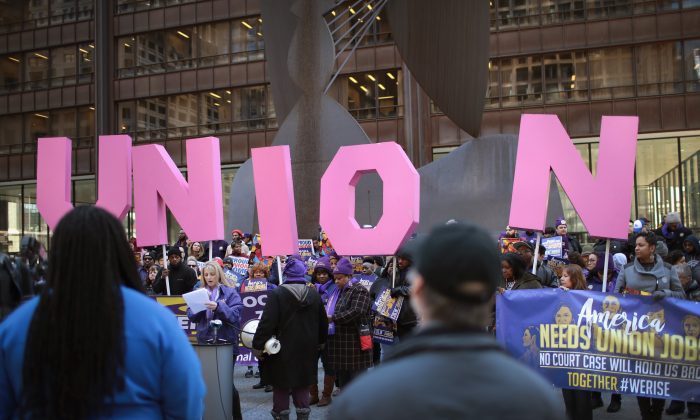 WASHINGTON— Presidential candidate Sen. Bernie Sanders (I-Vt.) thinks federal civil servants should be allowed to strike, and he wants to repeal 26 state laws that protect private-sector employees’ right to work without having to join a union.

In the massive proposal, unveiled on Aug. 21 and modeled on the Workplace Democracy Act Sanders has routinely introduced for years in Congress, Sanders presented a plan that his campaign said is designed “to restore workers’ rights to bargain for better wages, benefits, and working conditions.”

Besides the controversial provisions concerning federal employee strikes—which have never been legal in the United States—and state right-to-work laws, the proposal also endorses industry-wide bargaining instead of at individual firms, and ends “at-will” employment, the legal status of most private-sector jobs in most states.

In addition, the proposal would mandate the “card check” system, which lets the National Labor Relations Board certify a new union when a majority of workers in a company sign cards supporting the formation.

Card check—which does away with secret ballot voting in the workplace—has long been sought by organized labor, but unions leaders have never succeeded in winning congressional approval.

Union membership has declined in the U.S. private sector for decades, to a current low point of 6.4 percent, according to the Bureau of Labor Statistics. Sanders thinks his plan would double union membership nationwide in four years.

Sanders won an important boost on the radical left of the Democratic Party shortly after announcing his proposal, thanks to Service Employees International Union (SEIU) President Mary Kay Henry.

“This morning, I’m joining workers in Milwaukee to demand every #2020 candidate release a detailed plan like Bernie Sanders, explaining how they will make it possible for all working people to join unions. This is no time for minor tweaks to our broken system,” she wrote on Twitter.

The SEIU has 2 million members, including many potential Sanders volunteers.

Using government data, the Cato Institute calculated that total average compensation for federal employees “was $130,429 for federal workers in 2017, which was 79 percent higher than the private-sector average of $72,992.”

While nearly 34 percent of all public employees are unionized nationwide, most are barred legally from striking. Sanders may find himself with little company among Democrats in seeking to change that.

Beginning with President Franklin D. Roosevelt—who called such strikes “unthinkable and intolerable”—Democrats have mostly opposed allowing federal workers to strike for any reason.

When President John F. Kennedy signed the 1962 executive order that allowed civil servants to unionize, the document notably didn’t include the right to strike, or even to bargain on pay and benefits.

On Aug. 22, Jimmy Williams, former senior economics adviser to Sen. Richard Durbin (D-Ill.), told The Epoch Times that “my duty as a public servant was to the American taxpayer. Federal employees should not have the right to strike, as a matter of national and economic security. Our troops can’t, so why should someone at the Department of Labor?”

Republican Donald Devine, who served as U.S. Office of Personnel Management director under President Ronald Reagan, told The Epoch Times that Sanders’s proposal “would turn a resistant bureaucracy into a completely unmanageable one.”

Similarly, Taxpayers Protection Alliance President David Williams said on Aug. 22, “This is a ploy for votes, this is something Sanders is trying to do, endear himself to millions of federal workers by giving them the right to strike.”

Americans for Limited Government President Richard Manning, a former Bush administration political appointee in the Department of Labor, said he has “no problem with any federal worker going on strike, because it serves as the ideal means of natural selection for the needed permanent reduction in the federal workforce.”

Sanders’s proposal to do away with state right-to-work laws drew a sharp response from National Right to Work Foundation President Mark Mix, calling it “nothing more than Big Labor’s wish list of new coercive powers, especially over America’s workers.”

If enacted, Mix said, the proposal would mean “millions more workers would be fired, simply for refusing to pay financial tribute to union officials,” while the “so-called ‘card check’ would eliminate the protections that secret ballot elections provide for workers from union threats and pressure tactics during unionization drives.”

Mix said the proposal also “shows how out of touch Sanders and the D.C.-based union bosses praising this proposal are from rank-and-file workers and union members, who polling shows overwhelmingly believe union membership and dues payment should be voluntary and not required.”

State right-to-work laws were first authorized under Section 14(b) of the Taft-Hartley Act of 1947, and, in the years since, 26 states have adopted measures outlawing making payment of union dues a condition of employment.