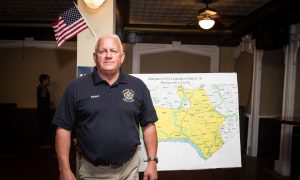 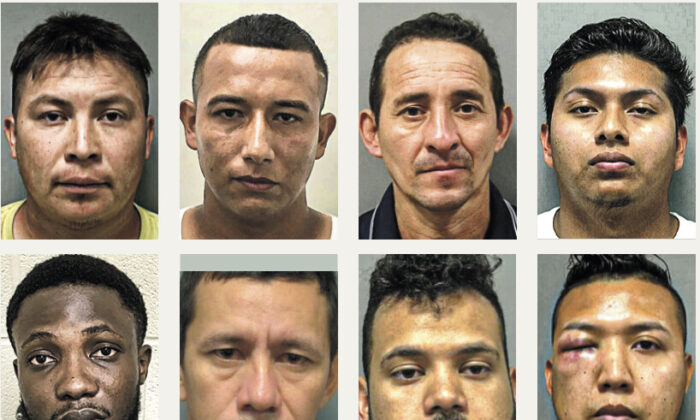 Sanctuary Policies Denounced After String of Rapes in Montgomery County

The first case that sparked the controversy came to light in late July, when two illegal immigrants were charged with repeatedly raping an 11-year-old girl over the course of a month in 2018.

The two men, Carlos Palacios-Amaya and Mauricio Barrera-Navidad, are Salvadoran nationals who are in the country illegally, according to Immigration and Customs Enforcement (ICE).

The men allegedly raped the girl in her own home on separate occasions after being introduced by her brother, according to court documents.

The victim, a student at Neelsville Middle School, said Palacios-Amaya would ask her to skip school so she would be home alone. He also recorded a video on his cellphone of one of the assaults, court documents say.

ICE said Palacios-Amaya was deported on June 5, 2014, and reentered the country undetected. Barrera-Navidad had been ordered removed by an immigration judge in December 2016. Both of their trials have been set for early 2020.

Two other cases of illegal immigrants allegedly raping children came to light in quick succession. The first was a Salvadoran national, Nestor Lopez-Guzman, who allegedly molested his 12-year-old stepdaughter over a six-month period, and assaulted her younger brother. ICE lodged a detainer on Lopez-Guzman, 46, and took custody of him. However, ICE said he has since been released, after posting an immigration bond.

When asked why ICE would release the man, a spokesperson said its “custody decisions concerning bond amounts are determined on a case-by-case basis.” ICE said it takes into account several factors, including a positive identification of the individual, known criminal record, history of immigration arrests and violations, manner of entry into the United States, “ties to the community and support network, if any, and probability of detainee appearing for court appearances and for removal, if ordered, and otherwise complying with all conditions of release.”

The next case against a child was that of Emilio Carrasco-Hernandez, who was charged with second-degree rape and sexual offenses for allegedly raping his 15-year-old stepdaughter in her grandmother’s bedroom in August.

According to the court documents, Carrasco-Hernandez, 37, violated the girl several times over the course of a week and “she had trouble using the bathroom because it was very painful and stinging.”

ICE said Carrasco-Hernandez, a Honduran national, was deported on April 6, 2017, and reentered the country undetected. Following his most recent arrest, ICE placed a detainer on him.

Also in August, Nelson Reyes-Medrano, 46, was arrested and charged for first-degree rape, sexual abuse of a minor, and first-degree assault.

According to court documents, Reyes-Medrano allegedly raped the 16-year-old daughter of his girlfriend in their home last year. The man held a knife to the victim’s neck, ordered her to remove her clothing, and forcibly raped her, the document states.

Reyes-Medrano, a Salvadoran who is illegal in the country, is being held without bond, and ICE lodged a detainer on Aug. 14 to take custody once he is released by the county.

In one of the most brutal attacks, a woman was punched in the head and face multiple times before being raped and left for dead in a Silver Spring apartment block on Aug. 16.

He is being held without bond and the trial is set for January 2020. ICE has lodged a detainer with Montgomery County for eventual custody of Mendoza.

Another Salvadoran illegal immigrant, Rodrigo Castro-Montejo, was charged with two counts of second-degree rape in mid-August.

Castro-Montejo, 25, has pleaded not guilty, and his lawyers have filed a motion to suppress evidence and dismiss the case.

He was released from jail after paying $1,000 (10 percent of the $10,000 bond set), despite an ICE detainer being placed on him. ICE accused the jail of only calling a local ICE agent to alert them of the release, rather than the agency’s 24-hour number. The local ICE agent was on vacation at the time and didn’t receive the message from the jail, meaning Castro-Montejo was released instead of being handed to ICE.

Three more cases have emerged in the first half of September, two involving illegal immigrants, and one man who was born in Honduras, but about whom ICE said it didn’t have anything public to share about his immigration status.

Nigerian national Oluwakayode Adebusuyi was charged with second-degree rape, assault, and false imprisonment on Aug. 28. Court documents allege that Adebusuyi offered a drunk woman his car to sleep in while outside a club where they had a mutual friend. The woman told investigators that Adebusuyi raped her while she was unconscious and then drove to her neighborhood and left her on the road, screaming for help.

Adebusuyi was also arrested in August 2018 for assault, sexual charges, and false imprisonment, but the prosecution dropped the case.

On Sept. 1, ICE lodged a detainer with the Montgomery County Detention Center for Adebusuyi.

Josue Gomez-Gonzalez, a 23-year-old illegal immigrant from El Salvador, was charged with rape and assault after he and a woman friend spent several hours drinking heavily at a local park, according to court documents. ICE filed a detainer with the Montgomery County Detention Center on Sept. 12.

Wilder Francisco Hernandez-Nolasco, a native Honduran, was hit with multiple second-degree rape charges and other sexual offenses on Sept. 11.

Court documents allege the 21-year-old raped and sexually assaulted his 6-year-old step-sister on multiple occasions at two Silver Spring homes they lived in over the course of a year. The court documents state that Hernandez-Nolasco threatened the girl not to tell anyone, or else she would be “grounded for 100 days.”

ICE has said it has nothing public to share about Hernandez-Nolasco’s immigration status.

She said the recent rapes could be the tip of the iceberg. “These were only eight that we know about, and I think that’s what’s most chilling to me.”

“There is very close cooperation between all sorts of federal agencies along with agencies underneath it at all levels,” she said, referencing agencies such as the FBI and DEA. “Why would we exempt immigration from that? Who’s responsible for the tropes and the propaganda that have brainwashed [people] into thinking that this is one area that we can never allow that kind of communication to keep people safer? It’s insane.”

On July 22, just days before the slew of rapes hit the headlines, Montgomery County Executive Marc Elrich signed an executive order that prohibits county officials from asking anyone their immigration status or to assist in an immigration investigation without a court order. It also closes nonpublic areas of county jails to ICE agents.

“They’ve been gagged, they’ve had their hands tied behind their backs, and I can’t imagine how frustrating it must be to finish the end of a shift and know that your county leaders and supervisors have ordered you not to communicate vital information that might save lives or spare suffering,” Malkin said.

Politicians have been strengthening Montgomery County’s sanctuary policies over the past 15 years, which have protected illegal aliens from federal immigration authorities, as well as provided benefits such as driver’s licenses and in-state tuition.

Elrich said on Aug. 27 that he might amend portions of the executive order, but released no specifics. He met with ICE agents from the Baltimore Field Office on Sept. 11, after which both sides said it was a productive meeting, according to local reports.

The Montgomery County Council released a statement on Sept. 5, saying rape and sexual assaults “are despicable acts of violence that unfortunately occur across all cultures and communities.”

The statement focuses on the council’s commitment to building a “safe and inclusive community,” while accusing the Trump administration, conservative news outlets, and “neo-Nazi sympathizers” of spreading false information.

“These individuals and organizations should be ashamed for spreading false information seeking to establish baseless, illogical, and xenophobic connection between a person’s failure to obtain legal status and their propensity to commit a sex crime,” the council states.

“Unlike other rapes with citizens committing the rapes, these are people that should not even be here. And I think that’s the crux of the issue, that they refuse to acknowledge. These people should not be here,” Botwin said.

“Had they let ICE do their job, had they let the Montgomery County Police do their job, those eight or nine rapes maybe would not have happened. Because somewhere along the way, these illegal aliens … one way or another, they crossed paths with the police.”

From 2009 through 2014, the number held steady at between 102 and 129 rapes per year. In 2015, the number jumped to 278, mainly due to reporting changes aligning with a new FBI definition, as well as adding child rapes (previously counted under child abuse) to the number.

Jenkins says his county is safer specifically because he cooperates with ICE in the 287(g) program.

“I truly think there’s a direct correlation. We have one of the lowest crime rates in the region. And we don’t have the magnitude of gang crime,” he said.

“Why as a society, are we tolerating this? Where does it stop?” Jenkins said of the rapes. “So I think the citizens down there really need to hold [Elrich] accountable—recall, throw him out of office, whatever.”

Earlier this year, Casa de Maryland was vociferous in its support for the state legislature to pass several bills that would severely hinder ICE operations in Maryland. The legislation ultimately failed.

However, on its website, Casa touts its success in blocking a program in Fairfax, Virginia, between county jails and ICE that would have allowed ICE access to illegal immigrants in jail.

The group said it is “moving to expand that victory in other localities and departments.”

It’s also pushing for a permanent amnesty for Deferred Action for Childhood Arrival recipients, as well as those with temporary protected status.

Casa de Maryland received more than half of its almost $10 million in revenue from government sources in fiscal 2016, according to its IRS 990 Form published on the Citizen Audit website.

Casa de Maryland didn’t return a request for comment about the alleged rapes in Montgomery County and whether they might impact the group’s cause.