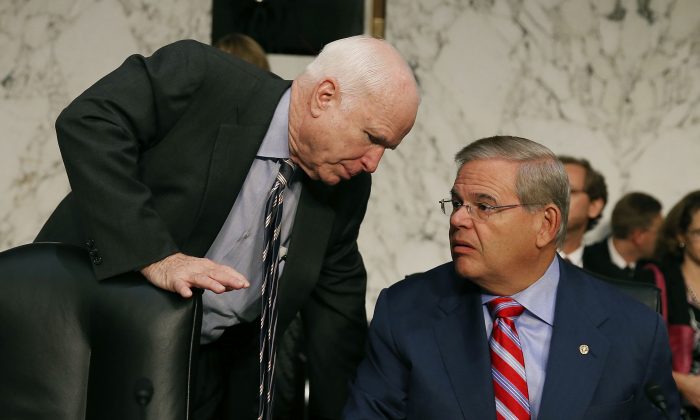 Sanctions the Fulcrum of Peace for Iran

In a move consistent with his past positions on international issues, Senator Robert Menendez, the Democratic Chairman of the U.S. Senate Foreign Relations Committee, accused the White House of using “over the top” rhetoric and “fear mongering tactics” to try to stop new sanctions on Iran. These new sanctions were to take effect after the United States brokered an interim deal with Iran over its nuclear program.

The deal with Iran agreed to by the United States and its P5+1 partners (Britain, France, Russia, China, and Germany) has been sharply criticized by some Democrats and many Republicans who are strong supporters of Israel. A bill aimed at imposing further sanctions on Iran is stalled in the Senate after the Obama administration asked for a delay to seek a diplomatic solution to the impasse with that country.

Under the deal reached with Iran, that country will accept restrictions on its nuclear program. In exchange, the United States and other world powers will provide limited relief from economic sanctions that have considerably damaged the economy, cut significantly into the country’s oil exports, and seriously affected Iranians’ quality of life.

Senator Menendez, who often supports President Obama, appearing on the National Public Radio program “All Things Considered,” said, “What I don’t appreciate is when I hear remarks out of the White House spokesman that…if we’re pursuing sanctions we’re marching the country off to war. I think that’s way over the top, I think that’s fear mongering.”

Senators Robert Menendez, D-N.J., and Mark Kirk, R-Ill., are preparing a bill to be ready for consideration when the Senate returns Dec. 9 from its two-week recess. The Menendez-Kirk proposal would require the administration to certify every 30 days that Iran is fulfilling the terms of the agreement reached in Geneva and that it hasn’t been involved in any act of terrorism against the United States.

Among the reasons the Obama administration has sought a deal with Iran is that limiting U.S. military commitments and resources in the Greater Middle East will allow the United States to free them up for use elsewhere or make substantial savings in its military expenditures.

Senator Menendez doesn’t seem to see these advantages, and prefers instead to lead an effort to strengthen sanctions and thus increase the animosity with the Iranian government that can only have ominous consequences in any efforts to secure peace with Iran.

Also important to consider is that actions proposed by Senator Menendez hinder the possibility of obtaining Iran’s help in solving pressing problems, such as the situation in Syria and Afghanistan’s rehabilitation efforts. Daud Moradian, the Director of the Afghan Institute of Strategic Studies stated recently that both the United States and Iran had started to cooperate in the rehabilitation of Afghanistan’s infrastructure.

In spite of that, Senator Robert Menendez said, after the Geneva agreement was announced, “I do not believe we should further reduce our sanctions, nor abstain from preparations to impose new sanctions,” something which, if carried out, would again put the region on the path to war.

Regarding these new developments, Uri Avnery, one of Israel’s leading peace activists stated, “To save itself from the image of utter failure, the American Israel Public Affairs Committee (AIPAC) has started to order its senators and congressmen to work out new sanctions to be instituted in some indefinite future.”

New sanctions would destroy the possibility for peaceful coexistence with Iran and would crush Iran’s president Hassan Rouhani’s efforts to face the hardliners in his country. Trita Parsi, president of the National Iranian American Council and a noted expert on Iranian affairs, declared that new sanctions would seriously limit Rouhani’s ability to maintain his “soft position” on the negotiations.

A war with Iran would be everybody’s loss. This is a fact that American legislators must consider if they wish to avoid wider war or further conflict in the region.