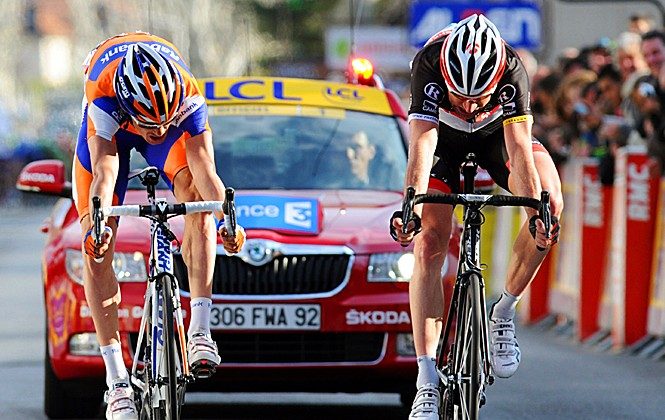 Luis-Leon Sanchez bested big Jens Voigt in the final two-man sprint after a 100-km breakaway to take the win in Stage Six of the Paris-Nice cycling race.

Sanchez, riding for Rabobank, Voigt of RadioShack-Nissan, and five other riders escaped after the second of five categorized climbs, stretching their lead to almost five minutes.

This provoked a response from Sky, as Sanchez, the 2009 Paris-Nice winner, was only 3:51 down in the General Classification; race leader Bradley Wiggins didn’t want to let this possible threat get back into contention.

Sky cut the lead to a safe margin as the break riders fell away in the face of the pace of Voigt and Sanchez. The leading pair pushed on until the final kilometer before they slowed and started watching each other. As the peloton swooped down on them, Voigt and Sanchez tried to force each other to make a move.

Finally Voigt took off; Sanchez went around on the right. The two rode side-by-side to the line, with Sanchez getting half-a-meter edge at the line.

The peloton arrived fifteen seconds later; Garmin-Barracuda sprinter Heinrich Hausler made a strong move down the right to beat Elia Viviani of Liquigas and Grega Bole of Lampre in the sprint, taking the remaining bonus time, thus keeping the GC unchanged.

After the stage, race leader Bradely Wiggins repeated his belief that the race was going to be deiced by the final uphill time trial up Col d’Eze .

On the Sky website, Wiggins said, “You can’t hide on Col d’Eze so everyone has got to have the legs on that day. At the end of the day, I’ve just got to concentrate on myself on Col d’Eze if we get through tomorrow in the same position.

“My biggest adversary that day is going to be myself and how I prepare and how I get into my zone. Other than that, I won’t think about anything else.”

Wiggins was extremely pleased with the performance of Sky Procycling, a team in only its third season, but packed with new people, many acquired from the breakup of powerhouse HTC-Columbia and the merger of Gasrmin and Leopard-Trek.

“We’ve come here with a good team and had a big hit with it,” Wiggins, said. “For me it’s not about coming here just to train or be part of the race it’s about gaining in confidence for the season.

“As a team, you can’t defend the jersey on the road in training so it’s certainly a massive learning curve for the team along with the Dauphine last year.

The race started with a 28-man break containing about half the top GC contenders, including Wiggins but not Movistar’s Alejandro. This group got  about 40 seconds gap on the peloton before Movistar started chasing, catching it climbing the day;’s second categorized ascent.

Despite talk about the close proximity of his rivals, the British national champion admitted:
Stage Seven, 219.5 km from Sisteron to Nice, contains four categorized climbs, two Cat 2s, a 3, and a Cat 1 climb 45 km from the end.

This ascent, the Cold de Vence, in 9.7 km long and averages 6.6 percent grade. Possibly this could shake out some of the sprinters and give riders like Oscar Freire or Alejandro Valverde a chance at a stage win.

It is not likely that any GC contenders will attack here; with 20 kms of flat road after the descent, the peloton could likely run down a break. It is probable that a few of the non-contenders might take a flyer here. Sky will be guarding Bradley Wiggins, as all the top GC riders will be looking ahead to Sunday’s time trial.