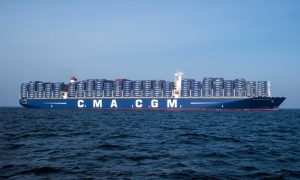 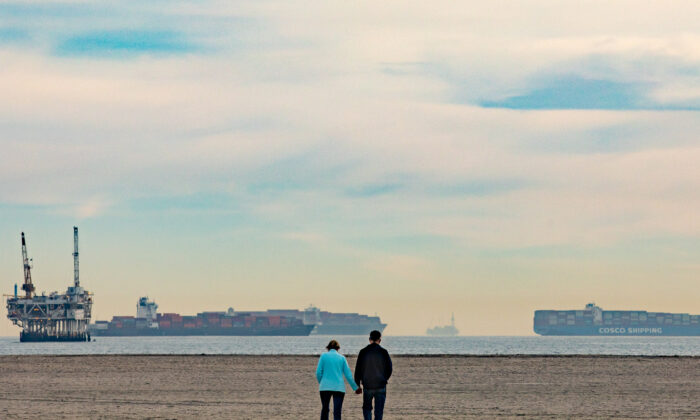 Ships line the horizon seen from Seal Beach, Calif., as they await to come ashore to The Port of Los Angeles, on Jan. 12, 2021. (John Fredricks/The Epoch Times)
Southern California

One out of 50 Americans derives their employment from the economic powerhouse at the combined ports of Los Angeles and Long Beach.

Even so, less than one percent of the infrastructure spending proposed last week by President Joe Biden would be spent on all “inland waterways, coastal ports, land ports of entry, and ferries,” according to an independent analysis done for The Epoch Times. The analysis is based on the White House’s “fact sheet,” published last week to accompany Biden’s so-called infrastructure proposal.

Of course, it hasn’t yet been disclosed how much of that spending would go toward improving coastal ports, as opposed to improving river waterways, border crossings, and ferries.

According to the fact sheet, $17 billion is proposed to be spent on the four modes of water and land ports, out of a proposed $2.3 trillion in spending.

The Port of Los Angeles’ website indicates nearly 3 million Americans nationwide derive their work from the economic impact created by the combined ports of Long Beach and Los Angeles.  The website refers to both ports together as the San Pedro Bay Port Complex.

Three million employed as a result of the San Pedro Bay Port Complex means one in 50 people nationwide are employed because of the facility, considering there are about 150 million employed in the U.S.

Before the current administration’s infrastructure proposal, the ports were already undergoing capital improvements of more than $2 billion.

It also states that “in California alone, nearly one million jobs are related to trade through the Port of Los Angeles.”

The containers that cargo ships carry are called 20-foot equivalent units (TEUs). In 2019, more than 30 percent of all TEUs traded into or from the U.S. went through the San Pedro Bay Port Complex.

Even though Southern California’s twin ports of Long Beach and Los Angeles generate 1 out of 50 of all jobs in the U.S., and one out of nine jobs across most of Southern California, and they handle more than 30 percent of all container-shipped cargo for the country, they can expect to get only some small fraction of 1 percent of the infrastructure spending being proposed.