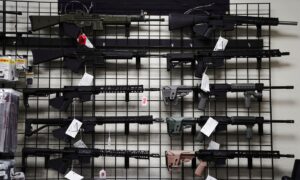 One is to require gun owners to have liability insurance coverage for their firearms. The second is to require them to pay a fee to compensate taxpayers for the cost of gun-related incidents.

The decision came after a recent mass shooting at the Santa Clara County Valley Transportation Authority yard in May that killed nine people.

One gun owner pointed out issues with the regulation and questioned whether it’s legal to tax a constitutional right.

“Once they start taxing on this Second Amendment right, are they going to tax on the First Amendment?” Evan Gan, founder of Happy Guntry, told NTD Television. “Because I want to say something, I have to use a special channel to be approved first, and prove that what I’m saying … aligns with what the government wants to preach? That sounds like some other country, not America.”

“While the Second Amendment protects the right to bear arms, it does not require taxpayers to subsidize gun ownership,” San Jose Mayor Sam Liccardo said in a statement.

They found that gun-related incidents in San Jose cost taxpayers $442 million per year. They believe that having gun owners pay a fee would relieve public expenses such as medical and police responses.

But Gan thinks there’s a lack of clarity and accountability as to where the funds would go. He also doesn’t feel safer because of the new law.

“It seems vice versa, the new laws that are coming out, I feel it’s more protective towards criminals than citizens,” Gan said. “It does nothing to protect the people, and it only encourages more criminals, because the criminals do crimes with guns and they all know [their] guns are illegal.”

Because owning a firearm is under federal regulation, local police might have no way of enforcing the new law and checking who has guns.

Bonta stated, “Legal gun sales do not automatically equate to a violent incident or crime, and responsible Californians who choose to own a firearm certainly have that right in California and in this nation.”

The law will get a final vote in September.