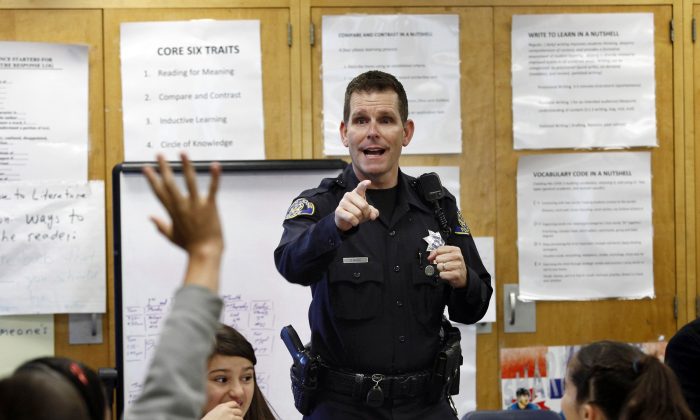 In this Tuesday, Oct. 28, 2014 file photo, Officer Phil White of the San Jose Police Department teaches a "Choices and Consequences" class for 5th grade students at Christopher Elementary School in San Jose, Calif. White is on leave as his department investigates comments posted online that threaten those protesting the recent deaths of unarmed black men in Ferguson, Missouri, and New York. In the tweets, White said he would kill anyone who threatens him or his family. He also said he would be off-duty at the movies with his gun if anyone "feels they can't breathe or their lives matter." (AP Photo/Bay Area News Group, Gary Reyes)
US

Veteran San Jose Police Officer, Phillip White, tweeted some very inflammatory messages, which he later deleted, along with his Twitter account, but not before a screenshot of them was taken. These remarks have landed him in hot water with his superiors, as he has now been placed on administrative leave.

The San Jose Police Officers’ Association responded to the comments, saying “offensive, disrespectful and inappropriate social media comments have no place in the public discourse surrounding the tragic loss of life from recent officer-involved incidents.”

Chief Larry Esquivel made a statement a day after the tweets, saying: “It is extremely important for the community to know the comments made on Officer White’s private social media account do not reflect the thoughts or feelings of the men and women here at the San Jose Police Department. Nor do we condone this type of behavior…”

Phillip White worked as a assistant basketball coach at Menlo College, he has since also been relieved of that position.