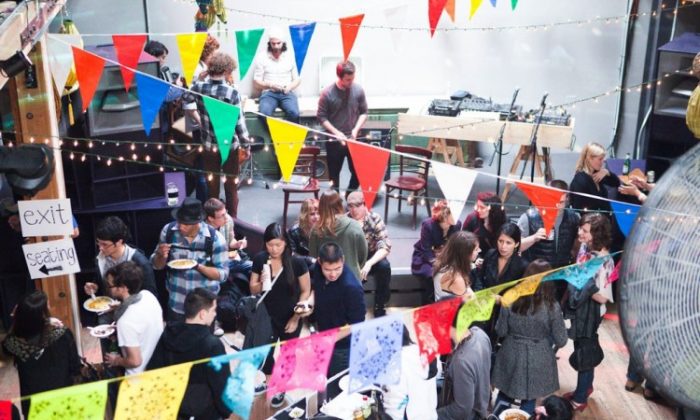 SAN FRANCISCO—San Francisco cares about food. As the original home of the popsicle and the martini—and famous as it is for sourdough bread (and bowls)— it’s no surprise that the city’s food community thrives off innovation as opposed to city-fied classics like “New York-style” cheesecake and “Chicago” deep-dish pizzas.

Homemade frozen custards, pork-belly biscuits in jelly pepper, and “Almost Better Than Sex” cake were things people could find in the popular pop-up Underground Market for the last three years. But now the market is closing.

“It really just hasn’t been the same event it was in the past,” said Underground Market founder Iso Rabins.

The market started as a small endeavor, a project local forager Rabins created when he couldn’t get into a farmer’s market. Rabins realized that other small food businesses couldn’t afford the permits and fees required for many markets either, and there was gap instead of an outlet for the small-scale productions.

The first Underground Market emerged in Dec. 2009, with seven vendors and up to 150 eaters. As a small, private dinners and members-only club there was no need for the standard vendors permits, but people like good food, and people talk, and so the market grew. Through word of mouth and wide press coverage, a couple of markets later thousands of people were pouring in with over a hundred vendors at each event.

“I definitely didn’t anticipate it getting as big as it was,” Rabins said.

The market sparked a series of similar events throughout the nation and up through Canada.

“Unfortunately, we had to learn about it from others,” said Dr. Rajiv Bhatia, director of the San Francisco Department of Public Health (SFDPH).

Cease-and-desist letters were sent in June 2011, and this caused the dry period with no events held the remainder of the year.

“We definitely tried to work together,” Rabins said. A lot of time was spent investigating ways to hold the market as it was intended, but in a legal fashion that would satisfy the SFDPH.

The market was anything but underground at this point.

“There was a guaranteed 2,000 people to come through and see you,” said Mike Davidson, the “Grilled Cheez Guy.”
“There’s nothing like the crowds we would get, we were guaranteed to get our name out there.”

Davidson won the Grilled Cheese Invitational in San Francisco multiple times, took his seven trophies, and got a food cart.

“It’s one of the few events I’ll do public,” said Davidson, who mostly does private catering like many of the Underground Market’s former vendors with small operations. “Public is too fickle, there’s too many challenges.”

But once vendor permits were required for space and usage, Davidson said the event became too costly.

Unlike the original, the Toronto Underground Market (TUM) is completely “permitted” and has been from the get-go. Hassel Aviles, mother of two, launched the first TUM event in the fall of 2011. All the food was prepared in a fully inspected kitchen, members paid an entry fee, and vendors paid $150 per booth and got to keep all the proceedings.

“Your market inspired me to start one here in Toronto (Canada) and it’s been one of the best things I’ve ever done,” wrote Aviles in a comment on Rabins’s announcement of the last market.

The market was wildly successful, with 1,200 tickets sold out within a week of the first event’s announcement. TUM has since had a turnout of over 2,000 people at each of their nine events thus far.

The appeal of these markets stems from more than just the presumed “exclusivity” of an underground market. The events were anything but a secret, and people turned up for the food—food that is handmade and made in small batches. For a lot of the vendors, getting the required permits and jumping through all the bureaucratic hoops before getting a chance to showcase their eats was not an option.

“He decided to go ahead and pay for the permits in the spring and agreed to follow the law,” Bhatia said. In the early summer of 2012, the market reopened fully permitted.

Rabins said the event had been something that could help small food businesses self-sustain, but despite the great tasting wares sold, the completely regulated market just couldn’t support the same goal.

“So it really just hasn’t been the same event it was in the past,” Rabins said. “We held about three that way and it just didn’t feel right.”

For “pie-lady” Jaynelle St. James, founder of Pietisserie, the Underground Market was the first time she presented her handmade pies to customers.

“It was instrumental in building my confidence in starting a food business,” St. James said. “Underground Market was the first time I really put my product and my business idea out in front of an audience of people.”

St. James dressed up the window of her mom’s house at her homecoming to Noe Valley in 2010, giving away free slices of pie to whoever came by and netting the nickname “pie lady.”

After debuting at the Underground Market, St. James went on to do “random acts of sweetness,” bringing her signature country-style window along and vending as a pop-up stand, bouncing from kitchen to kitchen, and selling to stores. St. James says the pies taste like home, and the red-painted country windows made people feel like it too.

“I have people who are still my customers who were there at that Underground Market,” St. James said.

The market wasn’t just inspirational to its participants. Rabins, founder of ForageSF, recently raised the funds needed to start Forage Kitchen, a “co-working space for food.” Like the market, it would serve as an incubator for small food businesses starting out, functioning not only as a kitchen but offering training and business consulting for professionals and non-professionals alike as well.

Rabins said that before the market, Forage Kitchen, or another resource of this scale, wasn’t anything he’d have thought he was able to do. Underground Market was a passion project, and it resonated with the Bay Area food community.

“I just try to follow what’s exciting to me, and I think that’s something that people respond to,” Rabins said.

St. James says she will be at the last Underground Market, held on Dec. 22, but not as a vendor. “I feel fortunate I was able to sell when it was operating as it was intended to—it would be really unfortunate to see it go completely.”

Rabins doesn’t plan to stop doing markets all together. It won’t be another farmer’s market, but “we haven’t quite formulated what that’ll be,” Rabins said. “A really cool thing would be to have a market comprised by things produced in the [Forage] Kitchen.”

And perhaps legality will become less of an issue for future market projects.

California recently passed new legislation to allow the vending of food items produced in home kitchens. The California Homemade Food Act, which will go into effect in January, allows for “non-potentially hazardous foods,” meaning baked goods are permitted, but only without cream, custard, and meat fillings to protect consumers from common oil, dairy, and meat-based hazards. Fruit pies, candies, honeys, and jams, however, are among the list of cottage-operation items okay to sell. Thirty other states have already passed similar legislation.

“The Bay Area food scene is great because the number of people who come here to work with food really raises the bar,” Rabins said. “It’s a friendly competition that forces you to continually innovate.”